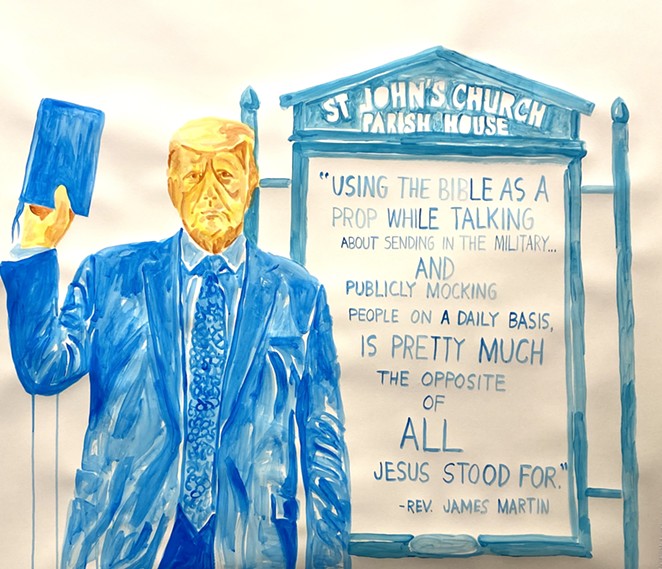 Prior to the photoshoot, Trump ordered the violent dispersal of peaceful protestors at the church — which included the institution's own clergy.

In a new series of paintings, Wheeler has recreated two images from the incident: one of Trump posing awkwardly lifting a bible in front of the church's sign and another depicting police in riot gear hounding protestors before the President's stunt.

In the painting of Trump, Wheeler uses the St. John's sign to display a searing indictment of the President's actions drawn from a statement made by prominent author and Jesuit priest Rev. James Martin.

"Using the bible as a prop while talking about sending in the military ... and publicly mocking people on a daily basis, is pretty much the opposite of all Jesus stood for," the quote reads.

"As I watched our feckless president try to figure out how to hold up a borrowed Bible while the smell of tear gas still hung in the air, my blood boiled," Wheeler told the Current in an email.

"The visual was just too much. I saw this piece done in my mind and immediately started on it.

"By the next day, the Republicans were, of course, completely silent, but there were many quotes from clergy that I could have chosen to put on the sign."

Wheeler's second painting, on the other hand, lets the action speak for itself, portraying a fleeing protestor surrounded by masked officers in riot gear with their batons poised to deal damage.

"Why are there so many Christians that helped [Trump] get elected and are still behind him and his antics? I will never understand it," Wheeler said.

"Maybe, just maybe, this [incident] will wake enough of them up and we can do what we have to do this November.