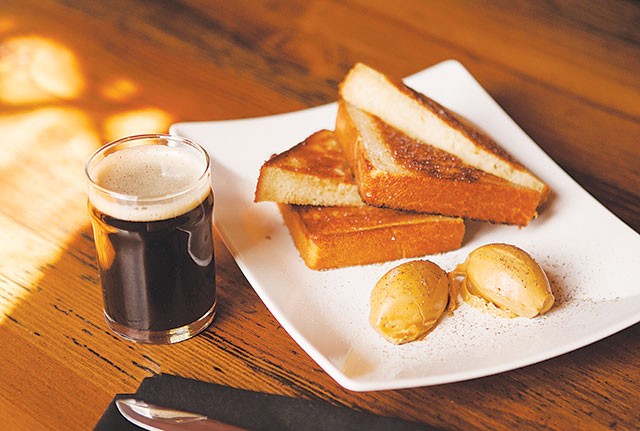 That beer goes with barbecue is a Texan article of faith, but as smoked meat purveyors gain cult status and the craft beer culture explodes, a Shiner and a plate of brisket seems like settling.

While wine pairing advice is now just a mouse click or sommelier away, how do average, beer-swillin’ Joes match brews to food, barbecue and beyond? For guidance in this nascent field, we approached brothers Tim and Alex Rattray of the Granary ‘Cue & Brew.

Every item on The Granary’s meticulously designed menu, from appetizer to dessert, has an ideal beverage counterpart. Their beer list boasts four or five Granary originals created by Alex and a carefully curated selection of other Texas craft brews. Tim’s highly lauded menu carries complex and innovative barbecue fare, not the easiest for matching with drinks. Working to create a harmonious dining experience, Alex explained his preference for dry, easy to drink beer. “If you have a heavy beer or something kind of sweet, it tends to pull away from the food instead of complementing it.” That’s just a warm-up. The brothers walked the Current through some other examples of their beer-food synergy guidelines.

As an appetizer, grit fritters pair perfectly with the Rye Saison. Notes of tropical fruit and spice in this light but dry Belgian-style beer complement the faint hint of coffee in the dish’s red eye mayonnaise. Dusted with “ham salt” (frozen cubes of ham pureed to a salt like consistency), any heaviness in the cheese infused fritters is cut by the Saison’s delicate effervescence, completing what Tim calls an “ode to the South.”

Alex matched the Brown Ale, his darkest beer, with thick slices of buttery Texas toast, explaining that “grains in the Brown Ale echo some of those [toast] flavors.” In pairing brews with food, he and his brother look for both contrasting and complementary tastes. In this case, dark, smoky notes in the malty ale mirror those in the Texas toast, while carbonation lifts the rich barbecue butter from the palate.

The Granary’s India Pale Ale is dry and refreshing with a citrusy, floral aroma. While IPA enthusiasts may crave a more intense hop experience, this beer goes down smoother with a meal – especially pork belly. “I love a good hoppy IPA,” said Alex, “but if you’re trying to drink it with your dinner, it can just kind of kill your palate.” The drink’s moderate bitterness contrasted with the dark red salsa negra and the fatty meat appeals even to IPA skeptics.

Inspired by the favorite dessert of the Rattray brothers’ grandmother, the Granary serves a mean piece of chess pie, best accompanied by a black IPA. Tim tops the classic buttermilk dessert with a barely sweet Chantilly cream. “Black coffee and pie is delicious,” noted Alex, “but beer and pie is even better.” The bitterness of the dark brew, which is half IPA and half Brown Ale, serves the same function as coffee: to clear the palate of the pie’s sweetness, making each bite as satisfying as the first.

Thanks to the Rattray brothers’ thoughtful culinary collaboration, you’d be hard pressed to order a disastrous combination of food and beer at the Granary ‘Cue and Brew. But, says Tim, “I think there are pairings that would enhance both, that would make the meal more memorable.”

Don’t be afraid to ask for help.

The Granary ‘Cue and Brew