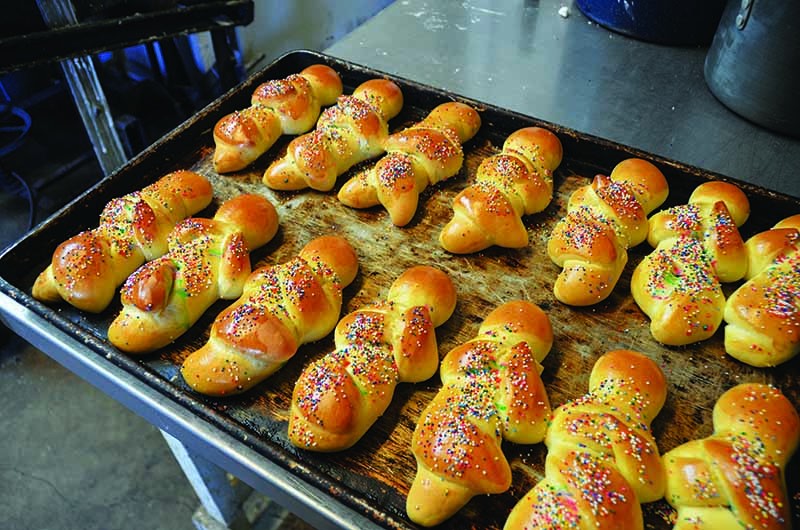 If you're planning to celebrate Día de los Muertos, or more specifically either Día de los Inocentes on November 1 and Día de los Difuntos on November 2, which make up the bank holiday in Mexico, you've got plenty of options.

The holiday's imagery has grown more prolific as gaggles of Halloween revelers will don calavera make-up, and yes, the colorful celebration of the dead has flowed into children's movies with The Book of Life, borrowing from the skeletal and color-saturated realm.

But the holiday—like most good ones should—has a strong connection with food, as most altars are adorned with sugar skulls, sugar-coated pan de muerto and traditionally, the dearly departed's favorite meal.

Panifico off 24th Street is known for their fluffy, orange and star anise-laced pan de muerto, which is offered in both traditional and doll-shaped varieties. Meant for sharing, even in their smallest sizes, the traditional rounds have received a colorful update as the bakery has started using colored sugar to add some oomph to their lineup. The traditional pan comes in three sizes: mini ($5.75), regular ($11) and tumba, or tombstone-shaped ($16.25). All are decorated with dough beads or "bones."

Then there are the gender-specific pastry effigies, dressed as either boys or girls, in brightly colored layers made with powdered sugar, shortening and water, similar to the coating on conchas.

Leticia Manzanares, manager for Panifico, talked about the popularity of the dolls, which she's seen increase yearly.

"Teachers come in and order the dolls for their Spanish classes if it falls during the week," Manzanares said. But the pastry's popularity has dipped into non-Mexican cultures as well.

"We get a lot of people that aren't Mexican, who know about the doll-shaped muertos, but not the traditional round (pan)," she said.