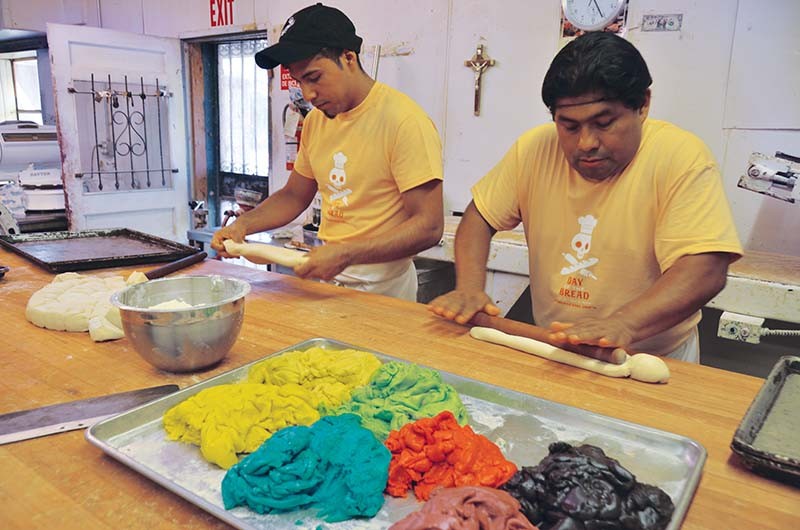 The effigies usually take 10 minutes to create from start to finish for three of Panifico's bakers, including Eduardo Gonzalez, Agusto Ortiz and Jorge Gamero. A two-pound slab of dough is shaped into a rectangle. Sharp-edged dough cutters are used to split the dough into legs and arms, and each baker sets to work with the six or seven colored powdered sugar rolls available, quickly turning each segment into a skirt, a dress, pants, a shirt, shoes and accessories (that double as doughy ties so the hands don't separate while baking in the oven). Once they've proofed for 20 to 25 minutes, the dolls go into the oven for another 30 and raisins are added as eyes once they've cooled off a bit.

The bakery has also started dabbling in more recognizable goodies such as calaverita sugar cookies, candy corn cookies and molasses cookies shaped and decorated as skeletons.

The sweets continue, albeit in a more refined fashion at Mixtli, where guests lucky enough to score tickets to the now sold-out chocolate tasting on November 2 will sip cocoa with lavender, almond and ancho-guajillo chile infusions. Still hoping to spread the Día de los Muertos traditions across San Antonio, owners Diego Galicia (originally from Toluca) and Rico Torres (who grew up in El Paso), are offering to-go chocolate bento boxes.

The box, $25, will include two pieces of pan de muerto made by Mixtli's baker Dennise Montano, a jar of vanilla bean butter, a jar of orange marmalade and tablets of the eatery's chocolate de metate to make at home. They'll take orders through October 31.

"This is one of the warmest, most family-friendly holidays in Mexico," Galicia said while explaining how different sects celebrate the holiday, either by spending the night at cemeteries or sharing stories about loved ones over cups of hot chocolate and slices of pan de muerto, "...and it's all about food... it's not about painting your face."

Last year's Día de los Muertos altar still sits inside the cozy space that is Mixtli (a refurbished train boxcar that sits in the Yard on McCullough), filled with skeleton trinkets and photographs of Rico's late great-grandmother, grandmother and grandfather.

Tradition has it that once altars are built and adorned with the departed's favorite snacks, a trail of zempasutchil, or marigolds, is used to help guide them to the altar during the wee hours of the night.

"My grandmother would make lots of tamales, and she was known for her menudo," Torres said. "To this day, I've never tasted anything like it—it was bright red, rich and super clean."