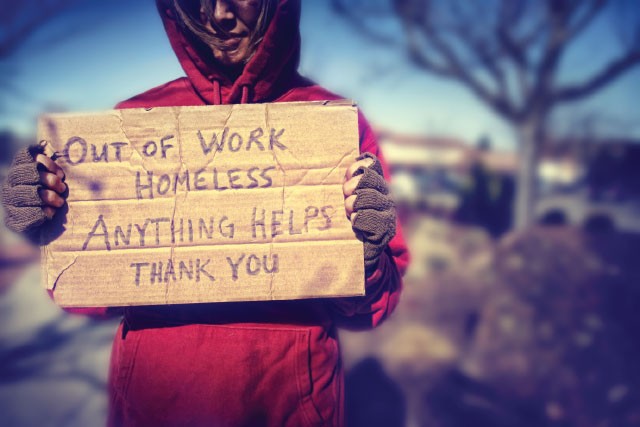 Support is dwindling for San Antonio Police Chief William McManus’ proposal to ticket those of us who want to give change or food to a homeless person. McManus’ logic: Most of that money will be spent on drugs or alcohol anyway, and why shouldn’t it be illegal to give to panhandlers, who are also committing a misdemeanor?

Critics, however, have raised important issues over the last few weeks: How does this jibe with First Amendment rights? How does this address the root cause of homelessness, which can be a complicated collision of substance abuse and financial distress? There has to be another way.

Since he first brought the proposal before the council’s Public Safety Committee in early September, McManus has said that giving spare change to someone on the street is helping feed that person’s addiction.

“I’ve been working the streets for 40 years, and in four cities, and I see what happens to the majority of money that goes to panhandlers,” he said. “A few people may need a buck to go buy a burger, but the vast majority of people are using that money to buy alcohol, drugs and cigarettes.”

In an ongoing research project, the National Law Center on Homelessness and Poverty tracks laws prohibiting panhandling in 187 cities across the country. The organization, which argues that these measures criminalize homelessness, has found that the number of such laws is increasing. In 2011, San Antonio strengthened its own panhandling rules. The ordinance prohibits aggressive solicitation, but it also discourages panhandling in high foot-traffic areas like Downtown, by making it illegal to ask for money or food within 50 feet of ATM machines, parking meters and garages, restaurants and other venues. Violations are Class C misdemeanors, punishable with a fine of up to $500. Another ordinance prohibits soliciting people who are driving cars and is punishable with a fine of up to $200.

“I’ve seen people that had as many as 100 violations over a period of three months,” said San Antonio Municipal Judge John Bull, who presides over the court responsible for handling the citations.

Panhandling citations, like other Class C misdemeanors, are punishable only by fines. And when someone can’t pay, which is frequently the case with homeless defendants, they’re often assigned to community service or probation, Bull said. If they don’t comply, they can be arrested and sentenced to jail time, which is credited toward the fine.

“There’s no greater punishment on one ticket or 500 tickets, other than a fine,” Bull said, calling the cycle a “revolving door.”

Michael Ariens, a professor at St. Mary’s University Law School who specializes in constitutional law, said McManus’ proposal would not hold up in court.

“Even if I don’t like the fact that somebody may approach me, that doesn’t make it constitutionally permissible for the chief of police to say that somebody who is the recipient of these requests can be criminally or civilly punished for deciding on his or her own to actually give money out of his or her own free will,” Ariens said.

Because San Antonio’s current solicitation ordinances regulate the conduct of a person’s speech, and the time, place and manner in which that speech is carried out, they may be more defensible in court. The American Civil Liberties Union has intervened in other states and judges in Michigan and Montana have found local ordinances unconstitutional, but neither the Texas Supreme Court, the highest court in the state, nor the Supreme Court of the United States has ruled definitively on panhandling regulations.

“There are some decisions from lower courts and higher courts in other states that declare it unconstitutional,” Ariens said, “but it’s an open question.”

The Texas Civil Rights Project has threatened to sue the City if council adopts the measure. In a letter to Mayor Ivy Taylor, city council members and the City attorney, Executive Director Jim Harrington called the proposal “foolish.”

“Instead of a grossly imprudent redirection of police resources and tax money, it would be better to spend that money on actually feeding the poor and attending to those on the street with mental disabilities,” the letter states.

Over the last few weeks, council members have backed away from the proposal. District 5 Councilwoman Shirley Gonzales said she initially entertained the idea because the area surrounding Haven for Hope, which is part of her district, has experienced higher rates of assault and drug use, but McManus’ proposal won’t solve those issues.

According to the annual point-in-time homeless survey conducted in January, 1,727 adults were homeless in Bexar County, and that number climbs to 2,270 when children are included. But Ron Brown, an outreach worker with Haven for Hope’s homeless services campus, said the majority of panhandlers he encounters are not really homeless.

“True homeless people do not have time to stand there and hold signs, especially when they know they can come here for resources,” he said.

In addition to its rehabilitation and recovery services, the facility also offers a temporary, secure courtyard for overnight lodging. Laura Calderon, external relations director at Haven for Hope, said the courtyard can accommodate up to 700 people every night, but people can and do linger in the area.

“We discourage them from hanging around the neighborhood, but we don’t police that,” Calderon said.

Calderon said that while Haven aims to change public stereotypes about the homeless, McManus’ proposal would raise public awareness about the reality of handouts.

“It’s important that the public know what happens to their donation,” she said. “San Antonio is a very generous city. We just want to make sure people know that they might be enabling someone’s addiction. Some people really need food and we understand that. They can get that here.”

Data from the 2014 homeless count also showed that more than half the people surveyed in January cited unemployment, job loss or an inability to pay rent as reasons why they’re homeless, while 20 percent cited substance abuse.

McManus says he plans to make a more formal presentation to the Public Safety Committee next month, but he, too, acknowledges that it won’t solve the underlying problem.

“The ordinance itself is not going to make panhandling go away. It’s not going to help much to reduce the instances of panhandling throughout the city,” McManus said. “It needs to be a more in-depth approach, addressing their addictive behavior.”