Do you hear that Rumble?

At 30, I’m nearing the end of my key demographic phase. I'm not 21, which means I don't mind paying more than $3.50 for a well drink, but my wallet can't keep up an $11 cocktail habit. But with the opening of Paper Tiger last March, I've already been inside its walls five more times than I was ever in the White Rabbit, and that's because the venue has essentially tried tapping every demographic that makes its way onto the St. Mary's Strip.

Those developments didn't happen overnight. Paper Tiger amped up the variety in early 2016 hosting a Pecha Kucha event, which introduced the addition of Cullum's Attaboy food truck to the compound, and later began hosting weekly crawfish boils with Where Y'at once the season started. And now there's Rumble. 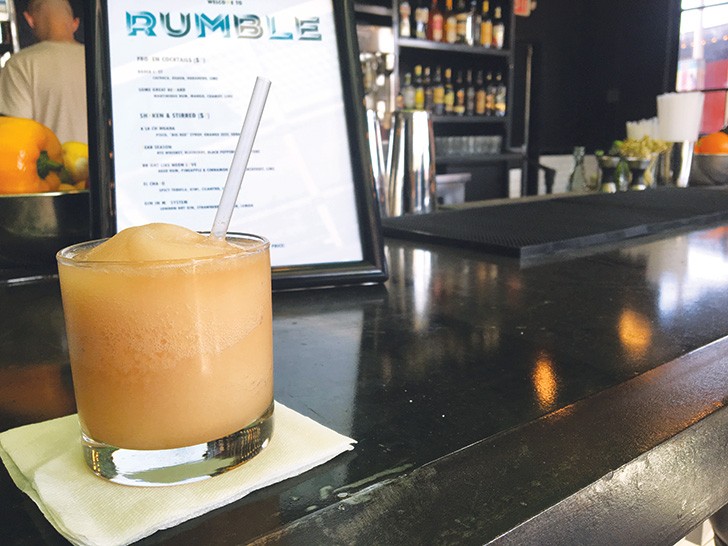 I hesitate to fangirl and call it the pièce de résistance because the bar's been open all of six days as of press time, but it's close. The joint effort of Empty Stomach (all the dudes behind Barbaro, Hot Joy), and Boulevardier Group (The Brooklynite, et. al.), Rumble took long enough to open with rumblings of the bar's opening being heard as far back as last summer. Construction woes aside, the joint adds cocktails to the corner of Ashby and St. Mary's, inside a ridiculously chill space. Covered in dizzying tiles (cross your eyes after too many frozen drinks and see what happens) and a demure black and minty/jade-ish hue, Rumble is bound to turn into a hang out whether you're starting the night there before a show, or shimmying over for a night cap after crawling your way down the Strip.

Beverages ($7), which steer into patio pounder territory, were created by Steven Martín. This makes sense since Paper Tiger is essentially 50 percent outdoor space. Frozen daiquiri machines — two currently, but there are more on the way — aren't to be taken lightly. The resulting cocktails, such as the Bahia Lust with cachaca and guava and San Anto-influenced Some Great Reward with mango and chamoy, are boozy. There's a fine beer list with local brews, too, for the beer-hounds and once again, nothing's more than $7.

If you needed yet another reason to visit the St. Mary's Strip, Rumble could be it. If you're a twirly 21-year-old or studded-jacket aficionado, you might find your way onto Paper Tiger's latest addition, whether you're a fan of cocktails or not.