Paranoid visions of the apocalypse 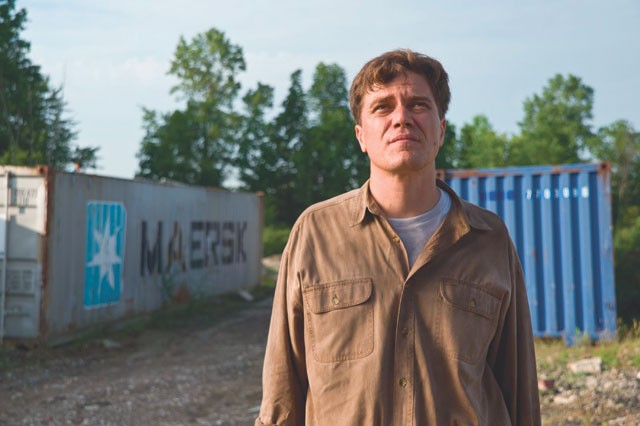 Fresh rain oozing with yellow oil, dead birds plummeting from the sky, and the sudden apparition of a tornado funnel on a sunshiny day — Curtis LaForche (Michael Shannon) is haunted by visions that point either to imminent disaster or else to incipient mental illness. "Is anyone seeing this?" Curtis asks. If no one else, the viewer, at least, sees what Curtis sees, though until the end we remain unable to determine whether he is a seer or a crackpot. A celestial voice commanded Abraham, Moses, and Jonah, and in Biblical times that was a sign of grace confirming their gift of prophecy. When Noah followed orders to build an ark, it saved him and his family from the global deluge. But when Curtis feeds his compulsion to build an elaborate, expensive storm shelter in a field behind his house, it costs him his job, his friends, and his life's savings. "Are you out of your mind?" asks his wife, Samantha (Jessica Chastain), whose patience is tested by Curtis's bizarre behavior.

Throughout its first 20 minutes, Take Shelter seems on the verge of collapsing into a tacky horror movie or, worse, an evangelical tract. It is neither, but instead a deftly modulated story of a mental breakdown that could double for the apocalypse. The opening sequences, in which Curtis passes up an easy opportunity to cheat on his wife and later gazes lovingly at his sleeping daughter, Hannah, establishes him as a dedicated family man. "I still take off my boots so that I won't wake her up," he marvels, though Hannah, born deaf, cannot be disturbed by boots. Curtis and Samantha take American Sign Language classes with Hannah, but the silence engulfing the family is ominous. Curtis is terse with his fellow roughnecks at the drilling rig where he works as a crew chief, but it is clear to them that something is disturbing him.

Michael Shannon appeared in writer-director Jeff Nichols' first film, Shotgun Stories (2007), and it is no wonder that Nichols would want Shannon to carry his second feature. Shannon neither patronizes nor sentimentalizes Curtis, a blue-collar, salt-of-the-earth guy whose salt has lost its savor. His nightmares might be delusions, but the blood and urine on his bedsheets are not. Is madness in his blood? Curtis, whose mother has been institutionalized for paranoid schizophrenia since he was 10, consults books on mental disorders. The counselor that his doctor recommends does nothing to allay his anxieties. Curtis realizes that he might be going crazy, but then again, if he is not, he surely must act immediately to protect his wife and daughter from impending doom — even if it means taking out a loan he cannot afford to build a survivalist refuge that sensible folks regard as utter folly.

"I'm afraid something might be coming, something not right," he tells Samantha. "I can't explain. I just need you to believe me." As Curtis's loving wife Samantha, Chastain — last seen to fine effect in Terrence Malick's The Tree of Life — fills that need but is uncertain whether she can best help her husband by humoring or opposing his sudden obsession. Though Samantha is tempted to grab Hannah and flee for safety and sanity, she stands by her manic man, more out of loyalty than understanding. When Curtis stands up at a social event and proclaims to all present: "There's a storm coming! And not one of you is prepared for it," Samantha is devastated, but she goes along with Curtis's preparations.

All this takes place not in ancient Palestine but in rural northern Ohio. The very vacancy of the setting, like the silences of the scenes, invites the mind to fill in blank spaces. Take Shelter could be an allegory of ecological catastrophe or global terror or biblical end-of-days. With more emphatic pacing, it might have echoed one of Alfred Hitchcock's exercises in dramatizing how a mind unravels, such as Suspicion, Psycho, or Vertigo. Like The Birds, Take Shelter features an avian attack on a human being. However, this film is what it is — a profoundly unsettling immersion into a mind that, pace Dylan, could use a weather man to tell it which way the wind is blowing. Or whether it is blowing at all. •