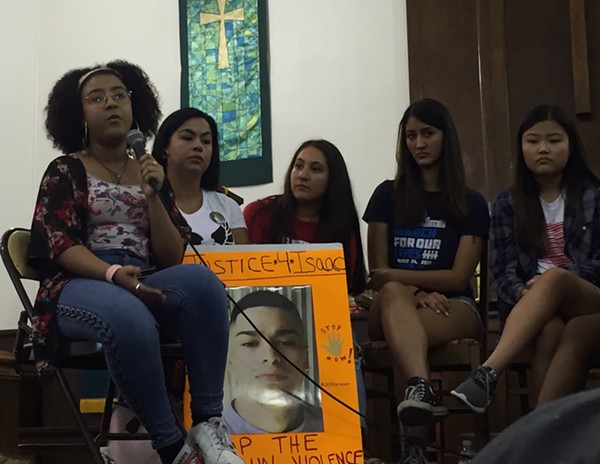 Yesterday, the March For Our Lives: Road To Change tour stopped in San Antonio to give dozens of students, parents activists a pep talk on community involvement.

Student activists from Marjory Stoneman Douglas High School in Parkland, Fla., are touring U.S. cities this summer to register young voters and push them to step up their political involvement. Early this year, a gunman killed 17 students and staff members at the school, galvanizing some survivors into the leaders of a student-led movement to curb gun violence.

During a lengthy discussion that also included San Antonio student activists, one of the Parkland survivors, Cameron Kasky, said the tour was a grassroots effort that rises from real student concerns, not something staged by political operatives. "We're all here because of the worst possible thing that could have happened,” he said.

Panelists urged those in the audience to find common ground with people who oppose their views and resist the temptation to resort to anger and name-calling.

Beyond registering to vote, they said, students need to make sure friends and classmates also make it to the polls. And they need to show up for local and state elections, where the gun-control lobby also spends heavily to fix outcomes.

"At the end of the day, we can turn the tide," said Kelly Choi, a recent graduate from Houston's Cypress Woods High School. "We can make a change. Are you ready to make Texas change?"

In the entryway of the church, volunteers worked at tables to register new voters and hand out fliers for gun-control groups such as Moms Demand action and Texas Gun Sense. An overflow crowd unable to fit into the main chapel watched from a portable video screen.

Meanwhile, across the street, a dozen or so armed protestors waved flags and held signs with slogans like "Liberty over security" while they blared country music from a stereo.