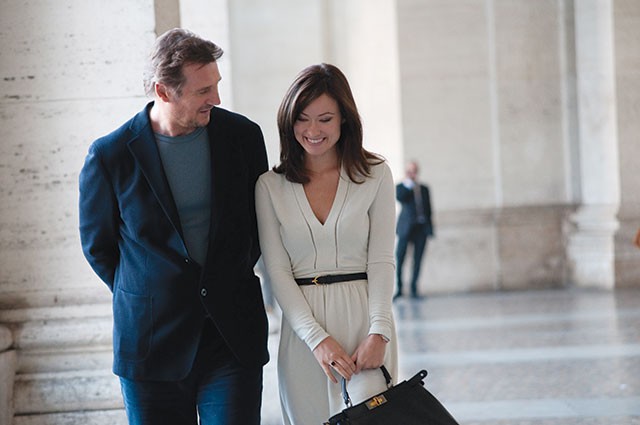 July is generally too early to pick the worst movie of the year, but Third Person is so bad it ranks as one of the worst movies ever made. That’s not hyperbole, and it’s not an attempt to take away from Ed Wood, director of the immortal schlock shitfest Plan 9 from Outer Space. Here’s the key difference: Wood was incompetent. Third Person’s writer and director, Paul Haggis, is not.

Or maybe we just think he’s not. This is the guy, after all, who co-created Walker, Texas Ranger. While writing bad TV is not necessarily a harbinger of bad movies to come, it’s time to reevaluate Haggis.

There’s Million Dollar Baby, which Haggis adapted from a collection of short stories and Clint Eastwood directed to admittedly great and affecting Oscar-winning brilliance. But even that movie has lines like this: “Then Frankie did something he hated doing; he took a chance.”

There’s the James Bond reboot Casino Royale (good, which Haggis co-wrote) and its sequel, Quantum of Solace (shit, which he likewise co-wrote).

Then there’s Crash. Not the flick about people turned on by car crashes, but the one in which a bunch of people learn in the most hackneyed ways how difficult race relations are. It’s trite, surface-level and relies on coincidence that’s difficult to accept even for people who are really good at suspending disbelief. (It won Academy Awards, too, but that’s not really a measure of a movie’s greatness when you consider American Hustle received 10 nominations earlier this year). Oh, and don’t forget those three Haggis-written episodes of Diff’rent Strokes.

I think I’d rather watch any of that nonsense again than suffer through Third Person. Like Crash, it juggles multiple storylines. There’s the writer (Liam Neeson, wasted) and his mistress (Olivia Wilde, wasted). And the writer’s wife (Kim Basinger, wasted). There’s the lout trying to make good (Adrien Brody, wasted) and the woman conning him (Moran Atias), and the lawyer (Maria Bello, wasted) trying to help a down-on-her-luck woman (Mila Kunis) keep her ex-husband (James Franco) from taking away her right to see their son.

Lost yet? You’re not alone, because Third Person doesn’t know where’s it’s going, either. Throw in a couple of dead children, an incest subplot and the fact that most of this bologna is taking place in the writer’s new novel, and you’ve got fuckwit gumbo. It doesn’t help that Neeson’s character is massively unappealing, totally unbelievable, and that Wilde’s character is also massively unappealing and totally unbelievable. So is Kunis’. And Brody’s. Franco and Bello come off a little better, if only because they’re barely on screen long enough to register as presences, let alone characters.

Haggis could have done the audience a big favor by making a short movie, as the endless narratives don’t allow for any one story to dominate. But that would require editing for time, and one thing Third Person has on its side is time (apologies to Jerry Ragovoy).

Haggis made waves a few years ago when he left the Church of Scientology. He should make quieter waves and announce his retirement from the movie biz. Third Person is rotten, ugly and a complete fucking waste of your time.