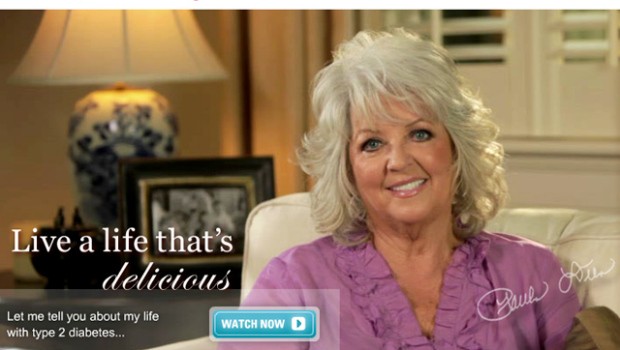 This month, restaurateur, celebrity chef, and Food Network television personality Paula Deen revealed her three-year-long battle with type 2 diabetes to the public. Though the news comes as a shock, given her sinful Southern food no one is too surprised. After all, hallmarks of Deen’s cooking include everything fried, carbohydrate-rich, sugary, and light on real nutritive foods (whole proteins, vegetables, nuts and seeds, etc.). One of the most famous dishes at her Savannah, Ga., restaurant The Lady and Sons being “The Lady’s Brunch Burger” — a beef patty topped with a fried egg and bacon. If she stopped there, it wouldn’t be quite so terrible since natural fats actually stimulate metabolism and bring down the glycemic index of meals. Only it's all piled high on a Krispy Kreme-style glazed doughnut (imagine the carbs and sugar). Deen’s health announcement coincidentally came on the same day she revealed her endorsement plans for the diabetes drug Victoza — an injection aimed at regulating blood-sugar levels. In one Victoza ad, a solemn Deen looks straight into the camera and says, “Hey y’all. I’m here to share something with you. A while back I was told that I have type 2 diabetes. I wasn’t about to change my life.” Then her mood brightens: “I have made simple changes in my life, like cutting back on one of my favorite things: sweet tea! And for a Southern girl, that’s a big deal.” The message Deen and the Victoza partnership sends is that it’s normal to have addictions to unhealthy food, changing old habits is too hard, and the best, simplest solution is a drug. Problems? There are of course side effects to this medication — chiefly that it’s tied to thyroid cancer (the fastest growing cancer in the U.S.). Also, even while on the drug, there are no guarantees of its effectiveness; the same long-term diabetes complications can still occur (amputation, blindness, neuropathy, skin infections, glaucoma, cataracts, hearing loss, gum disease, stroke, and others). Just like celiac disease, type 2 diabetes is an illness that is food induced (whether or not there may be a strong genetic component). If food is the culprit, isn’t changing the diet the real solution? With a nation eating so many processed foods, even a simple whole foods diet seems extreme — just as Paula Deen implies in her ad campaign. It’s another perfect example of the pharmaceutical industry picking up where a lifetime of unhealthy processed food leaves off: our health. Because even when food tastes as good as Deen's Southern-fried creations inevitably do, maybe the only people benefiting are those on the other side of such a drug campaign.   Sources:

Liz Schau is a Certified Holistic Health Counselor who specializes in nutritional changes for women with thyroid disease, food allergies, and digestive health concerns. You can find her at LizSchau.com.