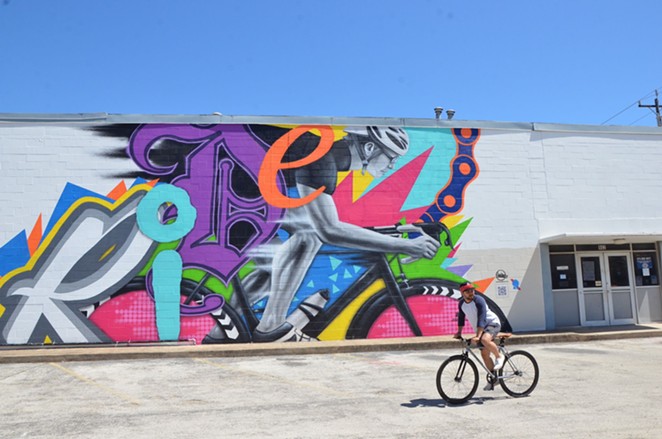 But not all of that buzz can be attributed to the beers the conglomerate brews — hipster-approved Pabst Blue Ribbon and longtime local faves Lone Star and Pearl among them. A fair amount of the chatter centers on the arts initiatives that have become a hallmark of the 177-year-old company’s modern era.

Pabst’s interest in the arts emerged in a fashion that Senior Brand Manager Seamus Gallagher describes as “organic.” Just as PBR was emerging as a trendy brew in the early 2000s, creative types began approaching the brand to request sponsorship — for concerts, performances and gallery openings — and Pabst obliged.

“The creative community kind of ran with it and then we tried to catch up,” Gallagher explained. “There’s so much [PBR] fan art out there. The brand shows up in pop music … It kind of happened organically and we just try to support it any way we can.”

Over the last two decades, that support has taken shape in murals across the U.S., gallery programs in New York and Los Angeles, and the annual Pabst Blue Ribbon Art Can Contest — the winner of which scores a hefty cash prize and gets their artwork reproduced on roughly 30 million cans of beer.

In its relatively short time in San Antonio, Pabst has opened the Southtown gallery PBR Studios, partnered with the artist duo Wide Awake to present the pop-up exhibition “In Living Pixels” at the Aztec Theatre and commissioned 10 new murals in collaboration with the San Antonio Street Art Initiative. 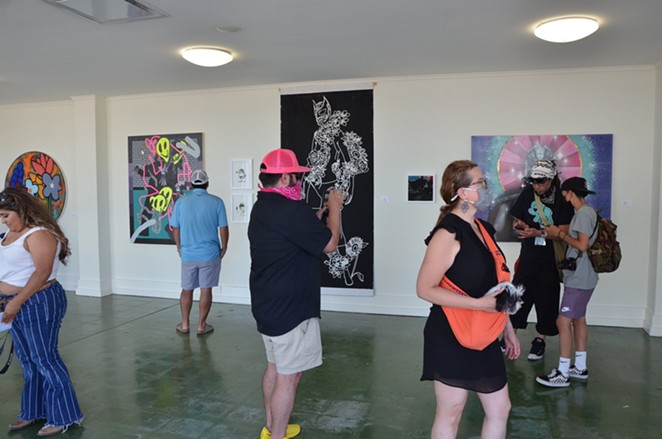 From certain angles, it might seem that art is having an identity crisis amid the Instagram era. As Wired reported in the tellingly titled article “Selfie Factories: The Rise of the Made-for-Instagram Museum,” ticketed, touring spectacles such as the Museum of Ice Cream and the Color Factory have lured crowds with pools of candy sprinkles, human-scale snow globes, ball pits for grown-ups and whimsical installations that essentially function as selfie backdrops. On the other side of the coin, the Smithsonian’s Renwick Gallery unwittingly struck social media gold with its immersive 2015 exhibition “Wonder.” And smartphone-wielding art fans routinely line up to snap themselves “experiencing” dazzling works by blue-chip artists like Yayoi Kusama and James Turrell.

In addition to posing in retro lounge chairs beneath a neon-lit wall of fake flowers and seesawing alongside a grid of 18 mirrored security domes, guests could venture inside esteemed local artist Chris Sauter’s Knowing and Seeing — a disorienting bedroom environment riddled with circular cutouts and curiously inhabited by a handmade telescope and a laptop streaming right-wing YouTube channels. Projected on the exterior and seeping in through the cutouts were screen grabs of memes and photographs of ants infected with cordyceps fungus (aka “zombie parasites”). Pushing the juxtaposition of playful and challenging work even further was the historic venue itself, which boldly features Meso-American kitsch and a jaw-dropping, three-ton chandelier. 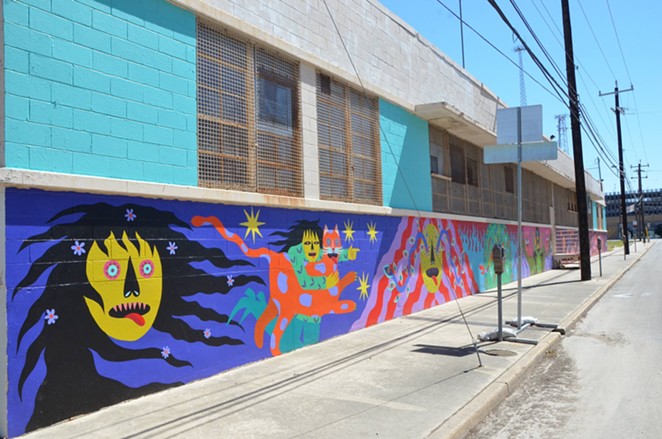 Further aligning itself with creative consumers while amplifying its support for street artists, Pabst inaugurated National Mural Day in 2019 and celebrated the occasion by commissioning 17 murals in Seattle, Las Vegas, Denver, Austin, Atlanta, Nashville and beyond.

“We’d been doing murals even before then,” said Moima Chowoe, Pabst’s community and social impact lead. “Public art and murals are a great way to connect with artists in the city [and] promote creativity.”

Not long after relocating to the Alamo City from Detroit, Chowoe got familiar with the San Antonio Street Art Initiative, a nonprofit headlined by local fixtures Shek Vega and Burgundy Woods.

“They’ve been doing amazing work and Shek is such a great artist and collaborator,” Chowoe said. As Pabst was already gearing up for its first big visual push, partnering with SASAI was a no-brainer.

“We were really excited just to hear from them,” Vega admitted. “Have you seen what Pabst has done in other cities across the U.S.? They’re pretty active when it comes to supporting the arts. They bring a whole new dynamic to arts and music and entertainment when it comes to them coming into San Antonio.”

After some planning meetings, the two entities devised “The Mural Connection” — an ambitious project linking the River North and Southtown neighborhoods through a series of 10 new murals unveiled during a community art walk held on April 24.

“It was a really quick turnaround — like almost an impossible one,” Vega said. “But I couldn’t let that opportunity slip.” When it came to the selection process, SASAI turned to artists Vega felt meshed with Pabst’s previous branding efforts. “They have this really cool, fun, edgy, quirky, character-driven [aesthetic] with their can art, so we wanted to facilitate that.”

Uniting the local talents of Los Otros (Vega plus fellow muralist Nik Soupe), Connie Chapa, Angela Fox and others, that aesthetic runs through all the murals save for one apt wildcard: Gary Sweeney’s The Job of the Artist. Presented as a companion to his installation Art Is the Stored Honey of the Human Soul — a focal point of the San Antonio Museum of Art’s parking lot for 20 years now — Sweeney’s contribution employs salvaged signage to spell out a quote from provocative painter Francis Bacon: “The job of the artist is to always deepen the mystery.”

“The enthusiasm of Pabst is pretty amazing,” Sweeney said of his experience working on “The Mural Connection.” As his piece was pre-existing, he didn’t feel quite the same pressure as some of the other participating artists. “Some of those other artists came up with some really cool stuff and it was a very short period of time,” Sweeny said.

Just a few blocks away on a building Pabst plans to develop as a marketing office and arts complex, Chapa and Fox created long, side-by-side murals that celebrate animals from wildly different points of view. For both artists, the murals represent their largest works to date.

Based on a previous painting commemorating the passing of her beloved cat (title: Kevin in Heaven), Fox’s Secrets of the Wild Woman conjures a surrealist dream sequence starring a female figure, a flying orange feline, a scorpion and snakes.

“I saw so many great pictures and heard stories about little girls interacting with the painting [during the art walk],” Fox said. “[They were] roaring and talking about the kitties!”

A young champion of low-brow art and pinup culture, Chapa serves up an anthropomorphic fantasy with Chiquitas, a bubbly scenario featuring a burlesque-inspired cat decked out in red heels and a fur-trimmed leotard, and a trio of coiffed pooches cruising in an Atomic Age convertible. Despite the hurdle of filling such a large space in a short period of time — not to mention getting rained on and sunburned in the process — Chapa says she loved her first foray into street art.

“I’m comfortable painting on a small scale, so when I first saw my wall I was filled with so much anxiety,” Chapa said. “I almost turned the offer down, but I knew this would be a great way to push myself as an artist. … In fact, I can’t wait to paint my next mural! Working with SASAI and Pabst was such an honor and a pleasure. … I’m forever grateful to them for giving us work as we start to get back out there after the pandemic … and I can’t wait to see what other rad and exciting things they bring to the city.”