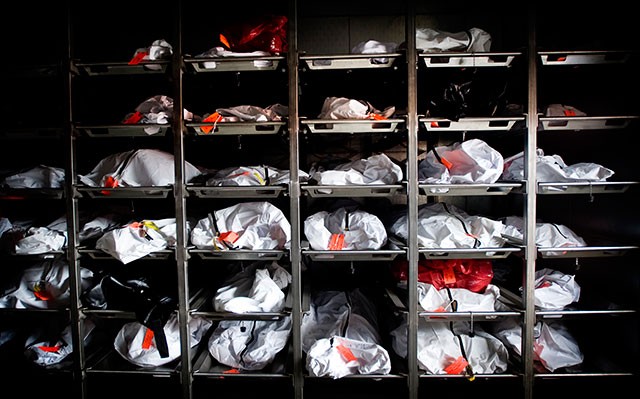 Don’t mistake The Undocumented as another contribution to the bitter, polarizing dialogue on illegal immigration and immigration reform. Rather, it is an austere adjustment, working to redirect the debate to a moral center: migrant deaths.

Since 1998, more than 2,000 dead bodies have been found in the Arizona Sonora Desert, and the annual toll increases every year. The Undocumented is a memorial to the many cases of John and Jane Does who perished on their way to the United States.

These are the bones of a mother and her 13-year-old daughter,” says the unidentified Pima County Medical Examiner in one of the most sobering scenes of the doc.

It is a three- to five-day trek on foot, roughly 60 miles, from the Mexican border to Tucson, Ariz. Hundreds of trails criss-cross the desert. The border crossers — men, women, children, and seniors — may be told by their coyote that it’s only a 13-hour trip, two days maximum. They bring only a gallon or two of water. If they cross in the summer, desert temperatures routinely exceed 105 degrees. A person becomes dehydrated, stops sweating, gets sick, and is left behind by the group. Most often, he or she dies of heat stroke.

Director Marco Williams says that the core of his intentions is to humanize the dead.

“I believe that if you see a face you cannot help but to feel something, perhaps care,” he said. In this film, we see the faces and the bodies of the dead, what the sun can do to a human, and the people who make up the statistics and rising bar graphs, as well as their families. While the images are explicit, the tone is reverent with compassion.

The film weaves four perspectives around the perished migrants: the Border Patrol, the Pima County medical examiner, the Mexican Consulate, and the families. The undocumented are the missing, unidentified dead. The documentary uncovers the surprising diligence of the authorities and their determined efforts to recover the remains, identify them, and return them to their families in Mexico.

Border Patrol agents split their time apprehending people who are crossing illegally, saving some from heat stroke, searching for reported missing persons, and retrieving found bones and corpses. The Pima County medical examiner is committed to treating each case equally as they would a U.S. citizen to determine the cause of death and to identify the person.

“You can do nothing for the dead,” said the county’s medical examiner. “You can only help the living.”

In conjunction with the documentary, Williams plans to launch an interactive website, theundocumented.com. It won’t be complete by the program’s broadcast, but in the works is “The Map of the Missing,” an interactive map that will highlight locations where some have died and provide images of the personal effects that they brought. He is also working with Games for Change (gamesforchange.org) and Gigantic Mechanic (giganticmechanic.com) to develop “The Migrant Trail,” a game that will connect players to a 76-mile walk from Sasabe, Mexico to Tucson, Arizona to raise awareness and protest migrant deaths.

The border fences were built in the 1990s to seal the traditional crossing points for migrants, forcing them to traverse the desert. Officials anticipated that migrants would die in the desert, and their death would serve as a deterrent for illegal crossing. Fifteen years later, this is not the case. Migrant deaths increase every year. The Undocumented is a call to abandon this strategy and factor migrant fatalities in the debate on immigration reform.