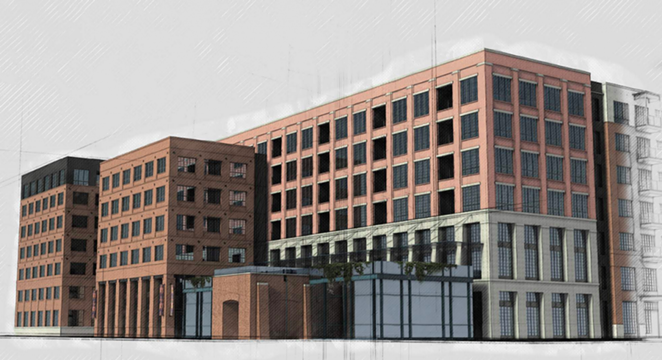 Pearl developer Silver Ventures is planning to build a 265-unit, 7-story apartment building on East Elmira Street, on the other side of the San Antonio River’s Museum Reach from the Pearl’s main campus.

The project would be the fourth major multifamily development by Silver Ventures, and would push the Pearl’s apartment total past 900 units.

Documents submitted to the city show the project consuming most of the city block bound by East Elmira, Schiller, East Quincy and East Park streets, a 3.1-acre site that touches a River Walk entrance. 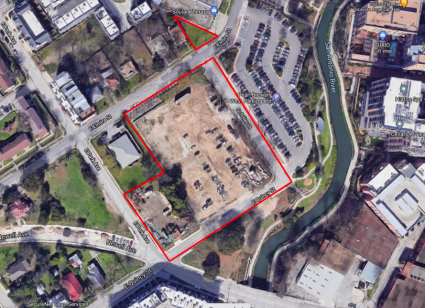 On Wednesday, the Historic and Design Review Commission (HDRC) is scheduled to review and potentially vote on the project.

The HDRC agenda item for the Elmira Apartments describes a seven-level “precast parking garage” wrapped with mostly apartments, and some live-work units and retail on the ground level, including a coffee shop. Structurally, five wood-framed stories would sit atop a “2-story concrete podium.” The facade would consist of mostly brick masonry, and painted stucco.

For the Elmira Apartments, Silver Ventures turned to local architect Don B. McDonald, who the company also tapped to design Credit Human’s 12-story headquarters building, and the Oxbox, an eight-story office building on Broadway — two projects it co-developed. Jefferson Bank, in an attempt for architectural continuity on Broadway, also hired McDonald for its upcoming 13-story headquarters at Broadway and East Grayson streets.

The documents also describe a pool deck, community living room and fitness center overlooking the river. The developer will explore using ” salvaged brewery artifacts” into the elements of the design, supporting documents read.

It’s unclear how much it will cost to build the project, what kind of incentives Silver Ventures is pursuing from governmental entities, and what the timeline looks like.