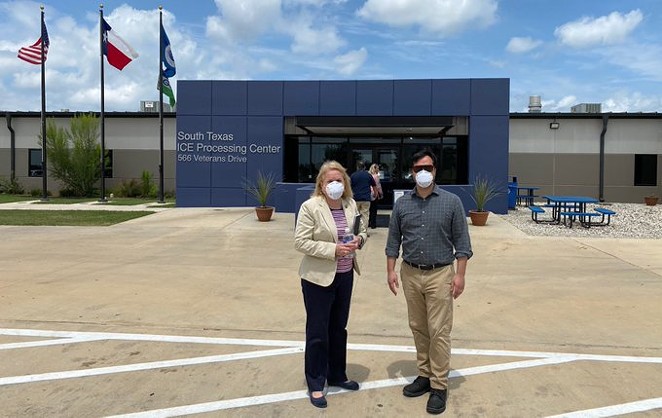 Another disturbing chapter of Texas history is unfolding in a rural prison town 58 miles south of San Antonio.

As of June 21, a total of 47 detainees at the complex, operated by for-profit prison company Geo Group, have contracted COVID-19, authorities confirm. In March, guards used pepper spray on detainees peacefully protesting the lack of protection against the coronavirus.

Attorneys for detainees and their family members — who are forbidden to visit the center — worry not enough is being done to protect their clients and loved ones from the spread of COVID-19. Residents living near the detention complex are also fearful of community spread, saying ICE and Geo Group haven’t been transparent enough about containment efforts.

“The epidemic concerns him,” attorney Carlos Castañeda said of a client who was transferred to the detention center in 2019, two years after being picked up for a DWI. “He is concerned because he’s been detained for ten months. He requested parole in March because he fears COVID-19. ICE denied it. Yes, he crossed the border illegally, but he’s been in the States for 15 years. His wife is a legal resident, and he has three children, all born in the United States.”

In Texas, the penalty for a first-time DWI offense is up to 180 days in jail and a fine up to $2,000. However, for Castañeda’s client, that punishment appears to be indefinite detention and risk of potential life-long health problems or death due to COVID-19.

Geo declined to be interviewed for this story. However, it emailed a statement about its efforts to keep detainees safe during the pandemic.

“We take our responsibility to ensure the health and safety of all those in our care and our employees with the utmost seriousness, and will continue to work with the federal government and local health officials to implement best practices, assessment and management of COVID-19, consistent with the latest guidance issues [sic] by the Centers for Disease Control and Prevention,” the statement reads.

Fewer than 15% of the U.S. immigrant detainees currently in custody have legal representation, according to the National Immigrant Justice Center. Now, during the COVID-19 pandemic, even those lucky few have seen their cases delayed repeatedly.

Health experts consider COVID-19 to be as infectious as measles, meaning it could spread rapidly inside a crowded detention facility. In response to those concerns, Geo Group halted all family visits in March. However, critics say it’s has done little else to help prevent the spread inside the Pearsall center.

Pilar Martinez, an attorney representing an asylum seeker from Somalia, is concerned about her client’s safety. To protect him from potential government retribution, she referred to him using the alias Aaden.

“At first, [Geo Group] was not providing masks,” Martinez said. “The second week of April was the first time I saw Aaden with a mask. In March and early April, no one was wearing masks.”

Martinez’s client, a member of a minority tribe in Somalia, is making a clan-based claim for asylum. When he was a baby, his father and siblings were killed by another tribe trying to steal the family’s land. Aaden and his mother fled to Mogadishu, where he was raised. Last year, Aaden and his mother were again targeted by a majority clan. This time, he was kidnapped and tortured until he confessed the location where his mother was in hiding.

She was later beaten to death, and Aaden fled Somalia. He’s been detained at Pearsall since November.

“My client’s case was delayed twice,” Martinez said. “Geo Group and ICE are only allowing one attorney into the facility at a time, even though the detention center has multiple rooms for client-attorney visits. They tiptoed around the fact that they had confirmed cases in the detention center. They change the rules, cancel hearings on a whim, even though cases are heard remotely via video to judges in San Antonio. Even at the remote courthouse, the judge didn’t know why hearings are canceled.”

Under the current COVID-19 policy, Geo Group and ICE forbid interpreters and psychologists to enter the facility and work with attorneys on cases, Martinez added.

“The pure frustration [is that] whoever is making the decisions is making it impossible to be effective,” she said. “My client only speaks Somali, so I always need an interpreter.”

Many individuals inside Geo’s detention sites are there for nonviolent offenses. Those can include infractions as minor as traffic violations or crossing the international border illegally. Even waiting for an asylum hearing, which is a legal right, not a crime, can lead to indefinite detention, according to immigration lawyers.

Still, Erica Schommer, an attorney in the immigration clinic at St. Mary’s School of Law in San Antonio, has seen some improvement at the South Texas ICE Processing Center.

“It’s better than it was,” she said. “They transferred all of the women out of Pearsall and have released some others, in part, because of COVID-19.”

Schommer said authorities decreased the number of people in the dorms from about 80 per room to 50, quarantining the individual groups. People who work in the kitchen or laundry, for example, are only allowed to take shifts with other people from the same dorm. Access to the library is similarly restricted.
“When the first cases at Pearsall came out, Geo Group was not cleaning,” she said. “Now they are using the sanitizing cleaner in the dorms. They gave detainees only one mask. The attorneys were required to wear personal protective equipment in mid-March.”

Geo Group provides voluntary jobs for detainees but pays them as little as $1 per day — an example of legalized slavery in the U.S. detention system, critics charge. Texas’ legal minimum wage is $7.25 an hour.

By all appearances, profit is the underlying motive to the callous treatment of detainees in the Pearsall facility, critics charge. Geo’s 2019 stockholder dividend for 2019 was $1.92 per share, or an attractive 14.54% yield based on its outstanding securities.

Geo Group and the National ICE Council, a union that represents 7,000 ICE employees, have been unflinching in their support President Donald Trump, who’s enacted one hardline immigration policy after another during his three years in office.

The National ICE Council backed Trump for president in 2016, citing his proposed increase for ICE and Border Patrol budgets. In February, the group endorsed the U.S. Senate bid of Jeff Sessions, who in his former role as U.S. Attorney General served as a chief enabler of Trump’s immigration crackdown, including its widely decried family separation policy.

According to OpenSecrets.org, an independent site that tracks money in politics, Geo Group’s PAC and employees spent $3 million in contributions and lobbying during 2019. Nearly all of that money went to Republican Senate and House candidates, the Trump campaign or PACs that support the president’s hardline immigration policies.

For years, journalists and activists have been shining a light on the abuses of for-profit detention centers, which critics liken to concentration camps. So far, corporate prisons and their greedy owners appear to be winning, however.
There has been little federal effort to scale back use of for-profit prison contractors.

On June 23, prompted by news reports and community concerns about the conditions at privately-run ICE detentions centers in Pearsall and the South Texas town of Dilley, Democratic U.S. Reps. Joaquin Castro of San Antonio, Sylvia Garcia of Houston and Henry Cuellar of Laredo spent the morning touring the sites.

During a call-in news conference, the members of Congress raised concerns that echo those of immigration attorneys.

“The conditions are bad,” Castro said. “They have endangered the lives of employees and the people in detention. The two places we saw today are prisons. Pearsall, there won’t be any debate that it is an actual prison. One of the Geo guys referred to the detainees as ‘inmates.’”

According to Castro, the only way to fix the system is for the next presidential administration to appoint a reformer to “clean house and stop the inhumane policies. You can’t put in someone who is a tepid person.”