Performance And Sculpture Creatively Collide In 'Move Me' 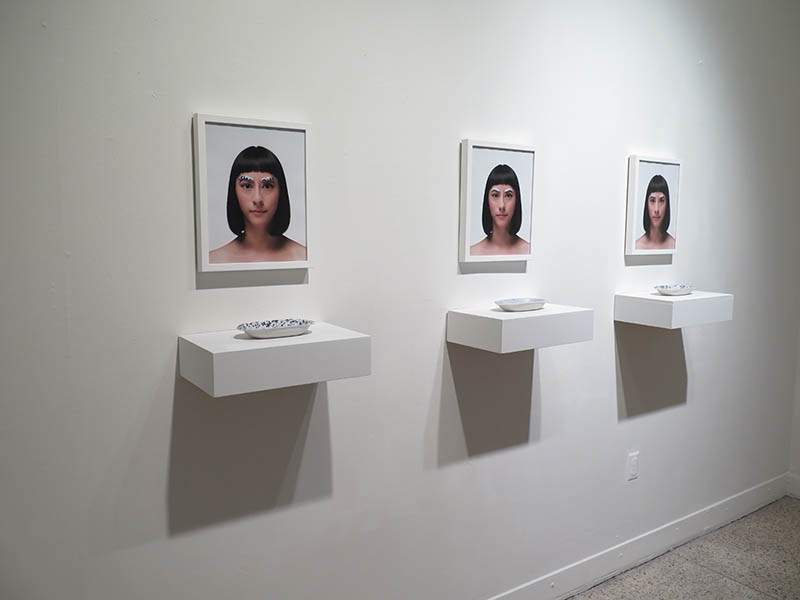 Jimmy James Canales uses his performance art to explore transformation through struggle, endurance and action. He took three years and walked 156 miles crisscrossing San Antonio to create his photo montage "Move Me," the Contemporary Art Month Perennial exhibit on view through May 23 at Museo Guadalupe.

"Walking is such a human thing because nearly everybody can do it," Canales told the San Antonio Current late last month. "But I wanted to challenge myself, to see the city and to travel into uncharted territory."

For his SATX Trek series, Canales walked from city limit sign to city limit sign on opposite sides of San Antonio. Along the way, he stayed "tethered" to social media, taking pictures with his iPhone and posting images on Instagram. He used the Map My Walk app so people could follow his trek on their own digital devices in real time.

"I learned our city is vast with many different ecosystems, full of layered paradoxes and territorial dogs, especially at night," Canales quipped. "These walks allowed me to get out of myself and get a brief view of the different worlds and lives out there in this city that I thought I knew."

In selecting eight artists featured in "Move Me," curator Amy Mackie of New Orleans said the work she found most compelling in San Antonio either featured physical movement or was "moving" – in the emotional sense.

"I thought all these artists were strong and all about taking risks and pushing boundaries," Mackie said in a phone interview from New Orleans. "But someone on the University of Texas at San Antonio faculty must be encouraging students to combine performance with sculpture."

Sculptor Ken Little is a likely candidate, but Mark McCoin, who specializes in new media, can be seen "playing" UTSA MFA candidate Roberto Celis, who turned himself into a musical instrument for his video, Poem of My Human Sound. The idea for transforming into a human cello began with an artist's residency in Berlin.

"In Berlin, I got to know about a dozen sound artists," Celis said in a phone interview. "They would play drums with objects on top, or use bones like a xylophone. Becoming a musical instrument myself gives me a way of expressing feelings and thoughts that I can't otherwise."

The videos in "Move Me" definitely aren't static and boring. In I Get Down, I Get Up, Raul Gonzalez is pushed backwards into traffic barrels, only to get up to be knocked down again. But his Self Portrait (Berlin) could be the most purely enjoyable video as Gonzalez dances around the city to Major Lazer's "Lose Yourself." While Patsy Cline warbles "I Fall to Pieces," Kristin Gamez in Falling to Pieces makes vivid a woman's struggle to escape an unhealthy relationship by trying to break free of two elastic bands that bind her to a brick wall — running forward, blood dripping from her mouth and falling down, only to be dragged back.

In the most painful video to watch, Jennifer Ling Datchuk plucks her eyebrows saying alternately "He loves me" and "He loves me not" with each jerk of the tweezers. On the opening night of "Move Me," she re-enacted the video with help from partner Ryan Takaba. Fortunately for their relationship, in both the live and video versions, the brutal ritual ended with "He loves me."

For the wistful, romantic Bolero, Anne Wallace filmed a pair of dancers performing on a piece of abandoned tile flooring in a Deco District vacant lot.

"I've always been interested in little pieces of found history around the city," Wallace said in a phone interview. "I'd like to film all sorts of different dances and then maybe turn the videos into a public art installation, perhaps a large-screen projection at the airport."

Karen Mahaffy's sculptural works were inspired by walking around Estonia as a Fulbright scholar. She took 26,720 steps to leave the two black smudges down the middle of a white wool rug in The Long Poem. Following Estonia tradition by stuffing wool into her shoes to stay warm led to a series of small, carved sculptures that resemble three-dimensional topographical maps.

"I took the sounds, played them through the objects to see which sound fitted the object best and then filtered that sound to really dial in the sound to the shape specifically," Boyd said via email. "I enjoy taking common sound sources then transforming them into something a bit more evocative."