Perry For President? Let’s Hope Not 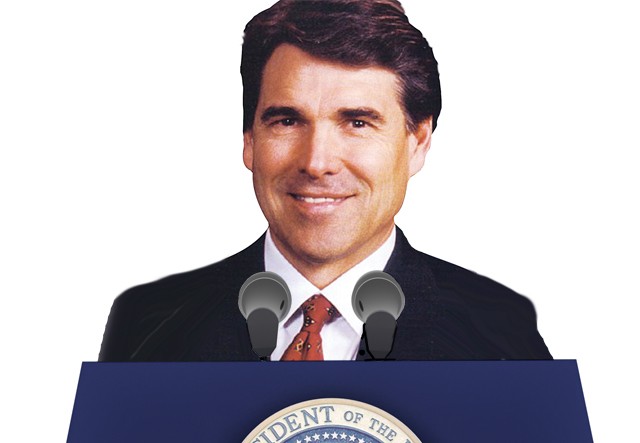 Will he or won’t he? That is the question.

From MSNBC to Fox News to the Houston Chronicle to dozens of blogs, the media and interested parties have been wagging their tongues for the last two weeks pontificating upon whether or not Texas’ governor will take his fantastic hair and cans of Aqua Net from Austin to the White House.

That was all it took for the Perry for President machine to go from zero to 60 in 2.8 seconds.

But, before folks outside Texas (which is still a state, although Perry has threatened secession) get too excited, perhaps we should let them know just what might be in store for them if Perry ends up in the race for president or, God forbid, actually becomes president.

Turn Those Cameras Off — Quick If the national media is miffed at Sarah Palin for not telling them exactly where her bus tour will be going, chances are they’ll get more than they bargained for with Perry, who has a history of being, shall we say, truculent with the media. Back in June of 2005, Perry was finishing up an interview about an education plan he was preparing to roll out though offering frightfully few details about the plan. After the reporter told him that he couldn’t win that battle and the interview concluded, Perry, thinking the cameras had stopped rolling, mocked the reporter with a sign-off that has come to adorn bumper stickers and T-shirts: “Adios, MoFo.”

No Micromanager Here —  A micromanager, Perry definitely is not. Back in 2005, when Perry’s office became aware of a major sex abuse scandal involving juveniles and employees at various Texas Youth Commission facilities, his office delayed doing anything about it … until the scandal was on the front pages of daily newspapers across the state in 2007. Picture Kennedy learning of long-range missiles in Cuba and then going to the Bahamas with Marilyn Monroe instead and you’ve pretty much got Perry tagged — except that he would have gone with anti-tax advocate Grover Norquist (which he has actually done).

Tarring and Feathering — Mitt Romney and President Obama had better watch out, because chances are, through the thinnest of threads, they too can be linked to a drug cartel or the killing of a law enforcement officer. Yes, who can forget two of Perry’s “October Surprises,” in his gubernatorial runs: In 2002, he linked Laredo millionaire Tony Sanchez to drug cartel money and, in 2010, he blamed former Houston Mayor Bill White for the shooting of a police officer — all because White presided over a dreaded “Sanctuary City.”

Gay? Peru Is Lovely This Time Of Year — At its best, it serves as a clear demonstration that an unscripted Rick Perry can say damned near anything. At its worst, it could show Perry is one of the most bigoted potential candidates to consider a run for the White House. We’re talking about Perry’s proclamation that if there was another state more lenient than Texas when it came to gay marriage, “then maybe that’s a better place for them [gays] to live,” which Perry famously uttered when ceremoniously signing a constitutional amendment declaring marriage an institution exclusively between a man and a women.

Certainly, that isn’t all — or even the worst of it. Consider that the state budget being passed out of a special session of the Texas Legislature as this goes to print underfunds public education by $4 billion and is $15 billion less than what is needed to operate the state at current levels. While that translates to “fiscal conservatism” to Perry, it translates to a lot of fired teachers, old folks getting kicked out of nursing homes, and children knocked off health insurance to the rest of us.

It would probably take a large, two-volume set of books to chronicle Perry’s misdeeds as governor. Heaven help us if Perry runs for president, because historians will be kept busy for decades chronicling that disaster. That is, of course, if Perry doesn’t cause Texas to secede from the Union by then and become President of the reanimated Republic of Texas.

Either way, keep August 6 free in your day planner. That’s the day of Perry’s self-proclaimed national day of fasting and prayer. Though invented by Perry, it’s being funded by the good folks at the American Family Association, and every governor in the United States is invited to Houston for the show — barring a major hurricane, we’re sure.

To quote Perry from his invitation to the solemn gathering, “There is hope for America … and we will find it on our knees.” If Perry picks August 6 as the date to launch his candidacy — which is the current rumor du jour in Austin this week — perhaps we’d all better get down on our knees, because a Perry candidacy, not to mention a Perry presidency, would be one hell of a bumpy ride.