PETA To Fly Over Battle Of Flowers Parade To Protest SeaWorld 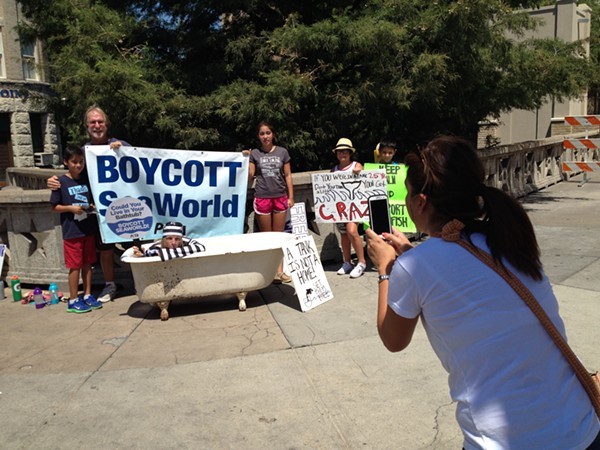 If by chance you look up to the sky during the Battle of Flowers Parade tomorrow, you might see a plane carrying a massive banner that will say "Captivity: No Fiesta 4 Orcas #SeaWorldSucks."

The message will be brought to Fiesta revelers by People for the Ethical Treatment of Animals (PETA).

"Fiesta commemorates the fight for freedom in Texas, and today, PETA is fighting for freedom for the orcas who are denied everything that's natural and important to them at SeaWorld," PETA Foundation Deputy General Counsel Delcianna Winders says in a press release. "No one who loves animals should ever buy a ticket to any show that uses and abuses sensitive marine mammals."

The plane will take off from Castroville Municipal Airport at 11 a.m. and fly over the parade around 12:30 p.m., according to PETA.

The animal rights organization says SeaWorld causes orcas to suffer from extreme sensory deprivation because of the tanks they are kept in and allege the orcas are forced to perform circus-style tricks for food.

SeaWorld argues it's a zoological institution that rehabilitates orcas and that orcas aren't harmed at its facilities.

PETA has suggested SeaWorld develop ocean sanctuaries where orcas could be rehabilitated and engage in natural settings while visitors could observe the animals from whale-watching centers.