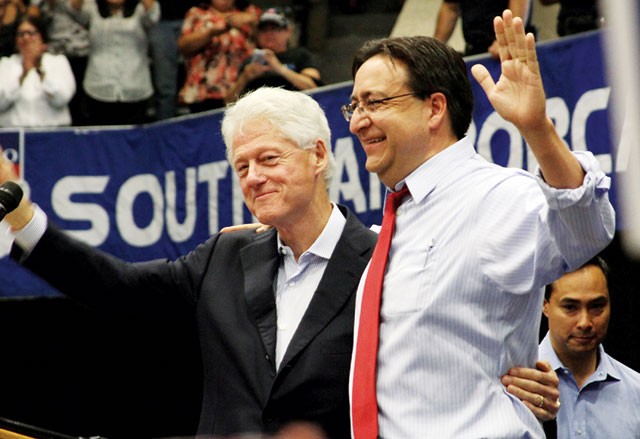 Former congressman and state Rep. Pete Gallego is a step closer to running in state Senate District 19, after the seat's current holder, San Antonio's Carlos Uresti, was convicted in February of 11 felonies.

Gallego, a Democrat who spent a couple of decades in the Texas House, filed papers with the Texas Ethics Commission this week to identify his campaign treasurer. State Rep. Roland Gutierrez, D-San Antonio, also has announced plans to run for the office.

Gallego was unavailable for immediate comment, but appeared as likely as anyone to gun for the seat. He, State Rep. Philip Cortez and City Councilman Rey Saldaña recently met on the Riverwalk to discuss its fate.

Two years ago, Gallego ran an unsuccessful campaign to take back a seat representing the 23rd U.S. Congressional District from Republican Will Hurd and has since said he wouldn't pursue it again.

While a race for the District 19 seat isn't scheduled until 2020, Uresti has faced a chorus of calls to step down. He faces sentencing in June plus a separate bribery trial.

"After receiving numerous calls to action, and talking with my family, I have taken the necessary steps with the Texas Ethics Commission to form my campaign to represent the people of Senate District 19," Gallego said in a statement released to the Current. "I've been overwhelmed with the support pouring out from this entire community. I will make my formal announcement in the coming weeks."