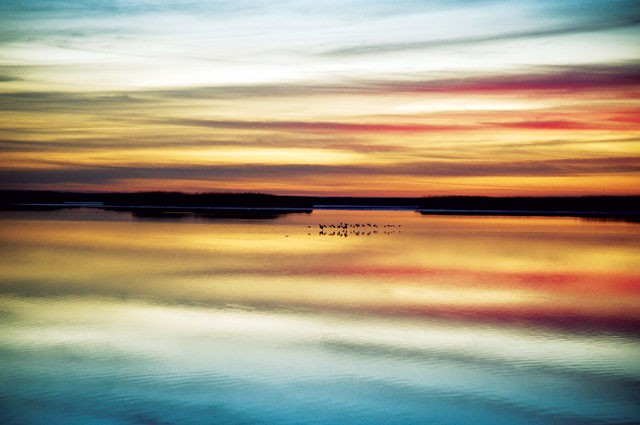 The horizon is not a line. It is a zone that extends in width beyond the edges of vision, rising and falling with the land, becoming incredibly thick in the haze of twilight. At night, it retreats into memory.

Peter French's exhibition on view in the hallway of Southwest School of Art's admin building tracks the horizon's play over land and water in the wild country of Texas in lyrical scenes that almost, but not quite, match expectations built by generations of nature photographers. Reflected clouds in water punctuated by the sparse strokes of a distant flock of birds, and close-ups of grass blades, portray the immense places outside our cities that have all but been forgotten in the rush towards urbanity. But these lands are not unpopulated. Children's portraits, framed by summer grasses and the stray destinations of casual glances — a pole thrusting up from a hillock, roads, and blurred bits of fencing, are seen in strange crops, as if from the edge of the eye. Described in exhibition notes by curator Kathy Armstrong as "experimental," French's self-taught technique includes use of six digital and film cameras, but it is his framing and capture of light that intrigues. His most interesting photos feel unresolved; but in the distant shots it is not a lack, but additional information — edges to the right and left of a traditionally conceived scene, or a lateral stretching of classic ratios — that confounds the eye, while reminding the viewer that the rectangle of the photograph (or painting, or screen) is only a conventionalized detail cut from the wide oval of our vision. In the almost accidental feeling close-ups, he brings street photographer Garry Winogrand's shoot-from-the hip technique to the country, delivering a sense of urgency, and more importantly, a knowing sense of place. Taken in long exposure, the night shots, such as Gage Ranch HQ at Night (Close), remind one of constructed photographs, hinting at early works by Canadian artist Jeff Wall. Though that connection is only coincidence (in conversation with the Current, French confirmed Winogrand's influence, but not Wall's), it doesn't matter. Delighting in sharing his works as much as taking them, French knows that it all happens in the eye of the viewer.