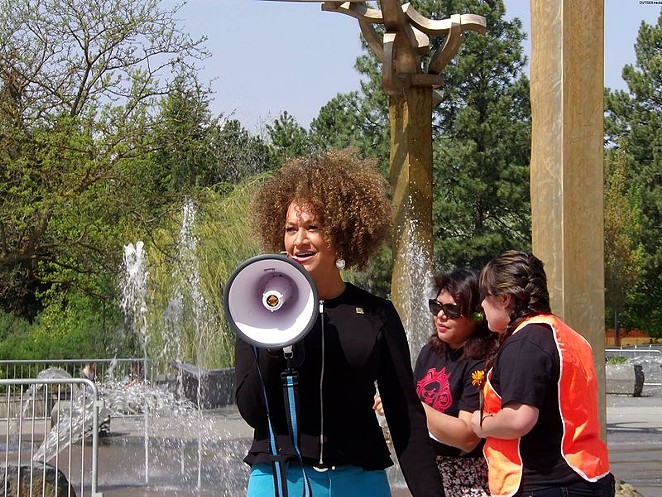 An online petition is demanding DreamWeek, a series of events honoring civil rights leader Martin Luther King Jr., drop an appearance by Rachel Dolezal, the white woman who drew national attention by claiming to be African-American while serving as an NAACP branch president.

The appearance is part of a Sunday, Jan. 20 screening at Alamo Drafthouse – Park North of The Rachel Divide, a Netflix documentary about how Dolezal's continued claim that she's “transracial” created turmoil for her family.

"It is our firm stance that this event does not create the community that Dr. King envisioned," reads the petition posted on Change.org. "We demand that Rachel Dolezal be disinvited from DreamWeek/DreamVoice and the event be cancelled."

Delozal's appearance was scheduled as part of a panel discussion following the film and is intended to foster dialogue, DreamWeek founder Shokare Nakpodia said. This year's summit includes around 170 events promoting tolerance, equality and diversity.

"We don't support Rachel in her lie," Nakpodia said. "The documentary focuses on that lie and how it affected those around her, including her children."

Still, Nakpodia said he plans to meet with petitioners to hear their concerns.

Past DreamWeek events generated angry emails and phone calls, he said, pointing out that discussions about race can touch on uncomfortable issues. But more discussion, not less, helps people find the truth.

"We can't start to curate the summit through petitions and dissent," he said. "We can't have one group have ownership of [MLK's] dream."

However, the petition on Change.org argues Dolezal's appearance would allow the controversial former Africana studies professor to promote a book she's written about her experience.

"We will not — under the guise of enlightenment or egalitarianism — accept a woman who is a proven fraud lecturing us about her experience," the petition reads. "Dolezal's actions were not only dishonest, but they were deeply damaging to the Black community because she took opportunities away from the very members of the community she claimed to be working on behalf of."

Kirsten Thompson, who posted the petition, said she's participating in seven DreamWeek events and is aware that others involved in the summit are also concerned about Dolezal's appearance. Dolezal's ability to choose whether she presents herself as white or black is the ultimate embodiment of privilege, Thompson added.

"This isn't a black-and-white issue," she said. "It's an issue of human decency."