Phantasmal Bar-goers and More Around SA 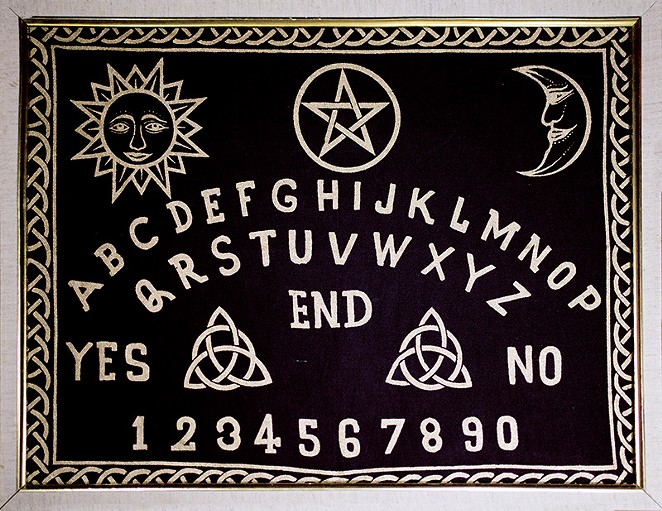 This is Halloween and we're fans of getting spooked, be it through actual lore or decorative gore. Thankfully, San Anto is replete with ghosts and they like to get their drink on.

By now we know The Menger's bar played host to Teddy Roosevelt as he recruited the Rough Riders cavalry and visitors can still hear a swinging pendulum often kept at the bar by TR himself. Traipse on over to The Cadillac Bar on South Flores where an angry female ghost is prone to chuck glassware. The building's been investigated by Mix 96.1's Russell Rush's Haunted Tour and features a slew of other ghouls.

Over in Tobin Hill, Danny Delgado's opened two bars that come equipped with ghostly features. Delgado and partner Andrea Vince pay their respects to the ghosts by really hammering home that eerie feeling and filling the space with original posters of the macabre, not one but two Ouija boards and several African masks. This is the vibe you'll find inside Faust Tavern.

Delgado named the bar after Johann Wolfgang von Goethe's two-part German piece of literature that tells the story of Faust — who sold his soul to the devil — and staff members and customers often share stories of hearing noises or seeing things.

"They either hear noises or see people as they make their way between the bar and kitchen ... it's just creepy at night," Delgado said.

The shadows, if you choose to believe such a thing, could belong to a previous owner's wife. Before it was Faust or Web House, the building at 517 E. Woodlawn was known as Café Camille where staff members believed the "deceased wife of the former owner" was responsible for opening and closing doors and picking items off walls, according to Spirits of the Border V: The History and Mystery of the Lone Star State.

At Phantom Room, Delgado's newest bar, the décor keeps in line with its sister watering hole. Antique fixtures and whatnots, found by Vince's mother, add an uncanny touch that's doubled once you hear about the ghostly female visitor that's been reported by the staff, landlord and other previous tenants.

If your taste for horror leans on the George A. Romero side of things, Zombies Bar at 4202 Thousand Oaks is for you. No specters here, but you will find a persistent theme complete with Virus vodka, faux-decomposed body parts, general gore and mad specials during The Walking Dead viewings on Sunday nights ($1 Bud Light, $2 zombie shots and free Frito Pie is more delicious than scary).