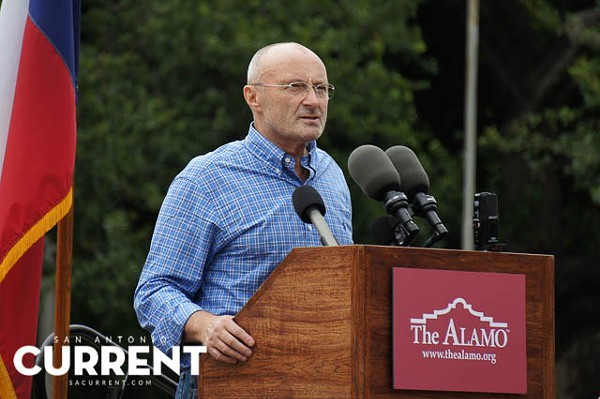 The man behind Sussido who has a keen interest in Alamo artifacts was honored at the State Capitol yesterday.

English artist Phil Collins, sorry Sir Phil Collins, was named an honorary Texan during a visit to both the Texas House and Senate. Last summer, Collins, perhaps the world's foremost collector of Alamo and Texas Revolution artifacts and memorabilia, donated his personal collection to the state of Texas so it could be displayed at the Shrine of Texas Liberty. Both legislative bodies passed resolutions honoring the former Genesis drummer and platinum-selling solo artist. The Senate resolution was presented by José Menéndez, D-San Antonio. Collins brought an additional gift to the ceremonies. He gave a pair of his drumsticks Rep. Joe Pickett, D-El Paso, according to the San Antonio Express-News.

Calls to make Collins an honorary Texas began immediately after the state announced Collin's intentions to donate his collection of hundreds of artifacts. Now we just need him to sing "The Star-Spangled Banner" at a Spurs game, and we'll be all set.