Pho is Good, but Viva's Bun is Better 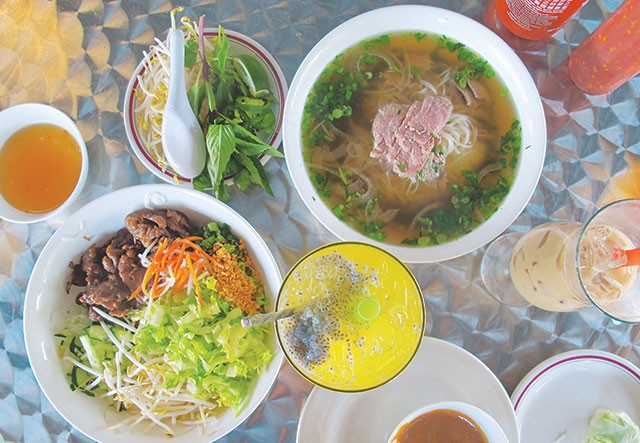 Far less ubiquitous than Tex-Mex and less familiar than Chinese or Indian, Vietnamese food fills a particular niche in this city’s culinary landscape. The most recent addition to this genre in San Antonio is Viva Pho and Teabo Lounge in Castle Hills. Situated in the former home of the late Lucky Burger on NW Military, the restaurant has undergone a fair amount of renovation and seats about 60 inside. Small, circular mirrors punctuate the bright blue walls while white, lotus-like lamps hang from the ceiling, casting soft light on patrons while whispering “IKEA” to the polyglot clientele. The patio is shaded and breezy if somewhat plain and seats roughly 20, with a few tall, bar-style two-tops.

This family-owned restaurant has only been open for a few weeks, which is long enough to have garnered a fair amount of attention — and some criticism. Within days of opening, grumbles about Viva’s slow and borderline neglectful service emerged online as diners relayed their first impressions. Having heard these complaints, my own experience with the friendly and attentive waitstaff came as a pleasant surprise. Servers happily obliged requests for advice, explained particular dishes, and kept drinks full. They also all seemed to have the numbered menu memorized, an attractive fact to guests wary of phonetic embarrassment.

Appetizers run between $2.99 and $10.95, with an order of two summer rolls landing on the lower end of the spectrum at $3.95. Shrimp and pork peeked through the sticky, translucent rice paper wrapping, joined by lettuce, herbs, and a few veggies. The rolls prominently featured basil, and although a bit more cilantro wouldn’t have hurt, flavors in the tightly wound roll were generally well proportioned. The pork was on the dry side and mostly unnecessary, but the shrimp were crisp and a rich, thick peanut sauce brought just enough sweetness and moisture to make the rolls interesting.

In the way of pho, Viva presents 10 variations of the much-loved comfort food. Hearty portions of the civilly priced ($6.45 to $8.95) soups come with filet mignon, brisket, tendon, tripe, meatballs, flank steak, or eye round, plus a few combinations of these.

The steaming broth — the backbone of any pho and first indicator of quality — of my number 31 pho táì was clear and flavorful. Abundant rice noodles were more round than flat and boiled to just done, successfully avoiding the mushy texture that comes from overcooking. The standard garnish plate included sprouts, basil, cilantro, lime, and jalapeno. The order’s thin-sliced flank steak wasn’t quite rare, as indicated on the menu, but far from overdone.

Best of all, the steak worked in harmony with other ingredients in the soup. As is usually the case in Vietnamese fare, the protein was treated as one component among many rather than the focal point of the meal. The prevailing obsession with meat that sways so many restaurants to veer from their cultural authenticity doesn’t seem to have taken root at Viva Pho. My soup was filling but not heavy, and the rice vermicelli bowls displayed this same refreshing departure from the cult of meat worship.

Number 48 on the menu and one of six vermicelli options, an order of bun thìt nuong chá gio yielded deliciously seasoned charbroiled pork with sprouts, chopped lettuce, carrots, and cucumber on a bed of rice vermicelli. A splash of fish sauce completed the mouth-watering juxtaposition of warm, savory pork and cool, crunchy veggies and noodles. While pho, the restaurant’s namesake dish, is a safe and tasty bet, the vermicelli just may be Viva’s ace in the hole.

Viva’s menu carries a handful of desserts, but the six fruit and milk bubble teas command more attention than tiramisu or fried bananas. With tapioca pearls and burst-in-your-mouth jelly balls, the numerous teas, slushes, and smoothies cost between $3.45 and $3.95. A few beverages included floating basil seeds encased in a halo of translucent gel, which brought a surprising and agreeable hint of spice.

Small, mostly solid chunks of fruit- flavored jelly swirled in the bottom of several milk and fruit teas. At best, the gelatinous cubes were a distraction from the tapioca pearls and basil seeds. At worst, they added an unwelcome diversity of texture and flavor to some already too-sweet drinks. The orange honey ginger tea, for example, mounted a saccharine assault on the senses that was intensified by the inclusion of every possible pearl, boba, jelly, and seed. The milk honeydew tea, on the other hand, struck the perfect balance of milky and faintly sweet, making for an enjoyable bubble beverage experience – despite the pervasive jelly cubes.