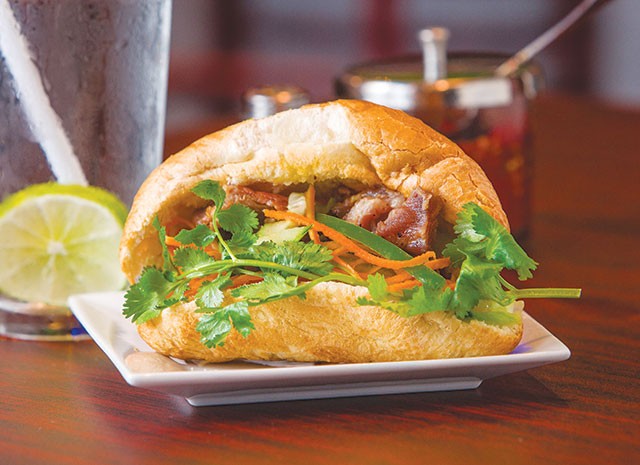 Let’s get this out of the way now. Yes, the name Pho Kim Long is undoubtedly one of the most risqué puns for a restaurant, but it just so happens the owner’s name is Kim Long. Leave the snarky comments at the door.

The family-owned and -operated Vietnamese joint opened in early August after Laurent’s Modern Cuisine closed in June (namesake Laurent Rea has since joined the culinary team at the Fig Tree). The quick turnaround is evident in the decor, or lack thereof. A visit to Pho Kim Long means you’re here to fill your belly, not to look at the gray walls.

The opening was quiet to be sure, the blacked-out windows contained a teensy open sign while signage was slow to follow, but that hasn’t kept PKL from gaining a steady lunch and dinner crowd of hungry Olmos Park and Monte Vista residents and then some, ready for a bowl of beef pho, with all the attendant bits and pieces.

An early visit was met with not one but several servers asking for our drink and dinner orders. I’m not knocking the attentiveness, our drinks rarely ran dry and food was delivered freakishly fast, but it did add an unnecessary amount of pressure to choose an appetizer or entrée. The extensive menu, broken down into appetizers, Vietnamese sandwiches, chicken noodle soup, beef noodle soup (aka pho), beef stew, rice plates, vermicelli noodles, fried rice and Kim Long’s specialties, can be a bit daunting.

Again, the staff was more than ready to help point out favorites including the fried and fresh Vietnamese spring rolls. We decided on the fresh option, which were speedily delivered to the table. The colorful rolls, packed with a round Asian rice noodle, lettuce and sizeable shrimp, were paired with a smooth peanut sauce that was just sweet enough. The delicately fried version wasn’t too bad, either.

The bánh mi was an interesting highlight. Served on a fluffy bolillo roll, the caramelized grilled pork variety was replete with carrots, cucumbers and a healthy serving of cilantro, a bargain at $3.50.

The beef noodle soup, which PKL boasts on the exterior of its menu as “the best traditional beef noodle soup” is rich though forgettable; the unexpected star of the show was its chicken counterpart.

Served piping hot, the chicken broth struck one of my dining companions as the perfect nourishment to help nurse a cold. Sure enough, the liquid is flavorful with hints of roasted onions, star anise and just a touch of clove. Fragrant and fresh Thai basil, bean sprouts, jalapeño slices, cilantro and lime are offered to top off the dish. While it may not be the most traditional of bowls, it does hit the spot. The eatery’s take on wonton and sliced pork left this diner torn: the wontons were tightly packed with well-seasoned pork, but the thinly sliced roasted variety was dry and tough.

I did have a bit of an experience with a bún of grilled shrimp and pork. At first the offering looks like any other around the city with its vibrant thinly sliced carrots, cucumbers and shreds of lettuce, but the dish’s textures really came into play in its protein of perfectly cooked shrimp with juicy, caramelized pork. A deeper look revealed a smattering of thinly sliced grilled red onions that really set this bowl apart. This marked the first of my Vietnamese dining experiences in which I didn’t employ hoisin, Sriracha or house chili paste sauce to liven up a dish.

There were a few glaring missteps, such as the heavy-handed use of fish sauce in the specialty pad Thai, which took stir-fried to another level by adding unnecessary water chestnuts, snap peas and baby corn. Perhaps the vegetables were leftover from the Chinese lunch specials (the sesame chicken did strike a chord with one of my dining partners)? Who knows, but baby corn should have no place in Southeast Asian cookery. Let’s all agree to that at the very least.

Funky name, be damned. While the young restaurant isn’t making leaps and bounds within the context of traditional fare, it’s filling a vacancy in the stomachs of Olmos Park residents hungry for something different that won’t break the bank.