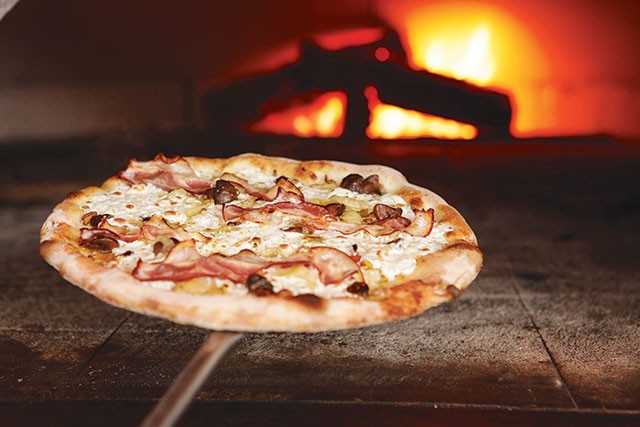 Since starting this gig, I’ve reviewed three restaurants that all made promises of perfect pizza. Some have pulled through, while others struggled. Rest assured that when it comes to pies, SoBro’s pizza game is strong.

This success is perhaps unsurprising, as the restaurant was pieced together meticulously by owners Mon and Gerry Shirley of Mon Thai Bistro and Paul Hughes of the short-lived Park Motel Café.

When SoBro Pizza Co. opened in April, the immediate vibe was that this eatery had its ducks in a row. The feeling of togetherness persisted during my first visit, after parking inside the Mosaic garage. The interiors come off as both clinical and posh. Tall ceilings and an airy feel give way to stark metal fixtures and tables. The wood-burning oven commands the room’s attention and the available bar seating around it makes for a fun show. Shelves of booze line the wall, and I can see myself coming back for bar offerings alone, which include craft brews on tap, sweet wines, Italian rosé, whites and reds available by the glass ($6 to $9) and by the bottle (low $20s to $300 for a Cabernet blend).

The menu is broken down into antipasti, soups, salads, sandwiches, sobrohs (or calzones) and pizza, available with red, white and green sauce or pesto. I ordered a simple Margherita pie, admittedly a hard pie to fuck up, but nonetheless, was impressed by it. Melty fior di latte (or milk’s flower) mozzarella cheese, just enough basil, a healthy portion of San Marzano tomato sauce were all tied together with an admirable crust. Halfway between Barbaro and Dough’s well, dough, the crust occasionally struggled to maintain structural integrity while supporting the piping hot toppings.

Unlike both Mon Thai and Park Motel Café, SoBro Pizza Co. doesn’t come off as a lunch destination yet. While the pizza is served expediently, it’s hard to fathom ordering a whole pie for a quick lunch. As a way to draw in the midday crowd, SoBro offers salads and sandwiches. Salads like the San Antonio Caesar with avocado, yellow cherry tomatoes, basil and cilantro earned praise from my lunch companion. The Casa Insalata di SoBro is an interesting standout with a heaping serving of mixed greens, sun-dried tomatoes and two bold tastes via the house green goddess dressing and cow’s milk Shropshire cheese, stinky through and through, that overshadowed the crisp pancetta.

The sandwich portion of the menu, served only from 11 a.m. to 5 p.m., proved underwhelming. On paper the combination of prosciutto, pepperoni, salami, tomato, arugula and house mozzarella sounds enticing, but what was delivered to our table was anemic, and the bread lacked the pizza dough’s finesse. As far as the sobrohs, my dining partner was left underwhelmed by the Quattro Formaggi. This time the dough was pillowy and flavorful, but proved too much for the cheese inside.

Upon a return visit, I ordered the Fun Guy pizza under “the whites” section—thus far my favorite offering, hands down. The menu bills it as the “perfect marriage” of taleggio (cheese), grilled mushrooms, caramelized onions, smoked pancetta and, surprisingly, pistachio nuts, which gave each slice a meatier texture. To share with the office, the Four Seasons pizza, broken into quadrants, offered a bit of everything for the indecisive set: artichokes represented spring, kalamata olives stood in for summer, grilled mushrooms for fall and prosciutto for winter rounded out the pie. The house mozzarella was a fabulous backdrop for the eclectic flavors.

With Tacos y Tequila moving into the northwest corner of the Mosaic’s ground level in the next few months, SoBro and its high-end pizzas join Brown Coffee Co. and Tuk Tuk Tap Room as pioneers of the area. As the walkability of Lower Broadway grows, it wouldn’t surprise me to find more and more San Antonians passing an evening with a glass of prosecco and a Fun Guy.