The back labels of Alsatian pinot gris wines tend to mention foie gras. In today’s economy, this is not likely to win converts to a wine we know little about. The grape’s counterpart (and historically upstart) Oregon producers make no such luxury claims — in fact, the wines sampled for this edition of Omniboire made no specific food pairing claims at all, preferring instead to talk of balance, respect for the land, versatility, and even Alsatian qualities — as if we know what those are …

More than you may ever have wanted to know is about to come your way, starting with the grape itself: It “hardly knows whether it is a dark or a light grape. The grape skins can be anything from grayish blue to brownish pink … ” says British oenothority Jancis Robinson. Though the grape appears in Italy and elsewhere (including California) as pinot grigio, its natural European home has come to be thought of as Alsace, where it produces full-bodied, often unctuous wines.

But it has more recently found an equally compatible home in Oregon alongside its parental varietal, pinot noir. Here, the wines produced tend to be lighter and naturally more acidic. Omniboire decided to put pinot gris to the test to find out what its basic qualities were and where they were best expressed. And, speaking of foie gras, we did it in no less auspicious a location than Le Rêve — without the luxurious liver, alas, but in some very good company by way of compensation.

Before the scores were dutifully tallied up by yours truly, the consensus was that Oregon wines had seized the day, although the top spot went to Alsace. In all, the panel tasted 10 wines; four didn’t make the cut — including one that Smith called a “turducken” wine with flavors inside of flavors inside of flavors. Having the bully pulpit is a good thing, however, and Omniboire is here to tell you that the 2006 Ponzi Willamette Valley Pinot Grigio goes great with Apple — computer, that is (we’re drinking the dregs as we write this).

“Everything is in balance,” noted Dunn, which alone usually gets our attention. “It’s like standing under a pear tree,” enthused Smith. (He also found the wine “delicate and racy,” qualities we could do worse than to emulate.) Frenchie, too, detected nice balance and structure, while Omniboire noted honeysuckle, white peach, and a trace of mineral.

“Austere,” said Dunn, a clear indication of the pronounced differences between the two growing areas. “Powerful and bold,” opined Jacob. “Crisp and refreshing with `notes of` lemon zest,” countered Smith. Omniboire found the balance a little lacking to start (though that changed with time), with less body and fruit than the peachy nose promised.

An unctuous, almost oily wine that really did demand foie gras. “I scored it high but only theoretically,” said Smith. “I didn’t really like it personally.” “It wanted a little more acidity,” thought Dunn, who was seconded by Jacob. “With more acidity it would be easier to pair with food — dill and salmon.” Omniboire shamefacedly admits to getting quite slobbery about this wine, however, evoking peaches, pears, minerals, and more.

Smith found this one to be stylish almost to a fault. “Tackle-box petrol meets stone fruit and a little smoke,” he noted, adding later that “it looked flashy on the runway, but I wouldn’t want to wear it.” The rest of us were a little less evocative. “Nice nose, but light and floral `with` green almond,” mentioned Jacob. “Herbaceous, but well balanced,” summarized Dunn. We found the finish a little sharp, almost bitter (typical of Oregon PGs remarked Smith), and were befuddled when it came to deciding what fruit was expressed. Quince?

“I knew this one,” said Jacob. “I often recommend it with an arugula and beet salad.” “A citrus bomb, with brown spice but the best color `of the lot`,” sniffed Smith. (He likes his color pale and glinty.) “Grassy, with lemon,” claimed Dunn, and Omniboire agreed, adding tart, green apple to the pot. A little alcohol imbalance was noted by several tasters, all of whom thought 13.6 percent (expressed in surely the smallest legal typeface) to be excessive for a wine of this type.

“The body should have been lighter if the nose was any indication,” Smith remarked. Omniboire begs to differ here, as this was one wine that seduced immediately with honey, ripe peach, and dried apricot. (We also admit that, in one-night-stand fashion, it faded fairly quickly.) Most tasters did find the wine floral — in a good sense. •

Exceptional, snap it up

Extremely good, seek it out 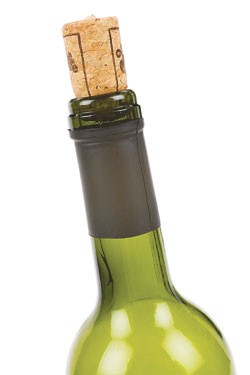 Most wines can be found at Central Market, Saglimbeni Fine Wines and other specialty wine shops