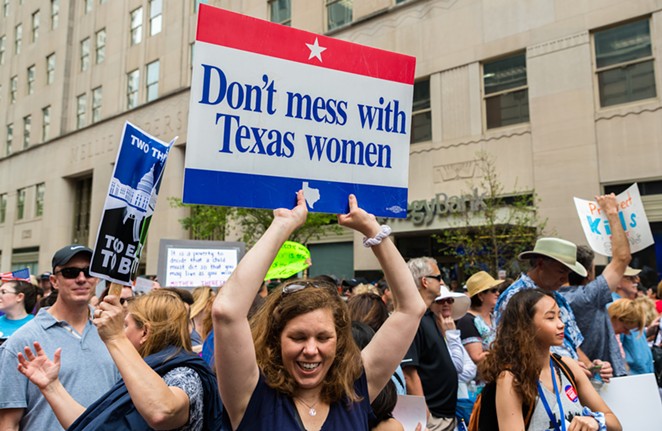 Need to stay updated on coronavirus news in Texas? Our evening roundup will help you stay on top of the day's latest updates. Sign up here.

Planned Parenthood is asking Texas to delay kicking the women’s health provider out of Medicaid in an effort to secure medical coverage for more than 8,000 Medicaid patients who rely on the group. This request comes just weeks after the U.S. 5th Circuit Court of Appeals sided with Texas officials to allow the state to restrict Medicaid access in what was the latest ruling in a five-year legal battle.

“During the most devastating public health crisis Texas has faced in a century, Planned Parenthood is calling on the Abbott administration to halt its efforts to dismantle health care for the most vulnerable Texans,” the group wrote in a statement Friday.

In a letter to the Texas Health and Human Services Commission earlier this week, the heads of Planned Parenthood’s three Texas branches asked the state to let them remain in the Medicaid program permanently — or at a minimum allow for a six-month grace period to help patients find new providers while still receiving care during a pandemic. HHSC did not immediately respond to a request for comment.

“It’s the least they can do for the thousands of people who could soon lose their trusted provider in the middle of a pandemic,” said Bhavik Kumar, the medical director for primary and trans care at Planned Parenthood Gulf Coast.

The state’s action would primarily hurt low-income Texans, people of color and women, who, because of “racist and discriminatory policies,” disproportionately enroll in programs like Medicaid, according to Planned Parenthood.

“The people who rely on Medicaid are the most vulnerable Texans and likely experiencing some of the worst economic effects of the pandemic,” said Jeffrey Hons, the president and chief executive of Planned Parenthood South Texas. “Forcing people — many of whom are struggling to make ends meet and care for their families in a global pandemic — to scramble for basic health care is terrible policy, certainly uncharitable, indeed un-American.”

In last month’s case, the state cited a now debunked 2015 video that claimed to show Planned Parenthood officials selling fetal tissue. The allegations in the video, made by anti-abortion advocates, have been categorically denied by Planned Parenthood, and investigations into the video have been unable to prove any wrongdoing.

In 2017, a lower court blocked the state from removing the organization from Medicaid, with the judge writing that the state's arguments in the case were "the building blocks of a best-selling novel rather than a case concerning the interplay of federal and state authority through the Medicaid program."

But the 5th Circuit judges ruled in November that legal precedent disqualifies people enrolled in Medicaid from taking issue with how states determine which providers are qualified to be in the program.

Following last month’s ruling, Planned Parenthood said removing them from the Medicaid program was a “blatantly political attack” by the state of Texas. Gov. Greg Abbott’s office did not immediately respond to requests for comment.