by Lauren A. Silva 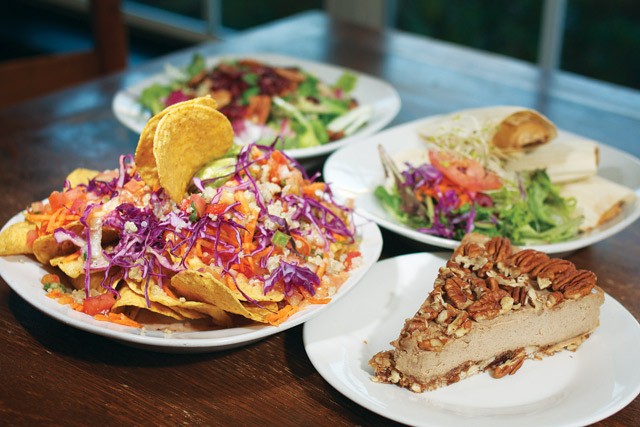 Typically, San Antonio's meaty, gravy-laden, and cheese-smothered offerings send vegans running. Cue Vegeria Vegan Restaurant, a mostly Tex-Mex vegan joint that also caters to gluten-free and raw diets. Located in the Viva Bookstore Complex on Broadway, Vegeria's décor is reminiscent of a festive Mexican home, with festive lights strung across the ceiling and photos of the owners in frames behind the counter. Local artists have their photography displayed on the restaurant's walls for prices that won't set you back a pretty penny.

Vegeria serves items like sangria mushrooms, vegan tamales, and a variety of sandwiches that will satisfy both vegetarian and carnivorous appetites. I arrived at 5 p.m. and was disappointed to hear that the tamales wouldn't be ready for a few more hours. The waitress recommended I try the Vegetable Enchiladas; my companion sprang after the Road Trip Burger. A few other items that caught my eye were the Tofu Egg Salad Sandwich, the Monster Tacos, and the Raw Beet Ravioli. The gluten-free bun on the burger is reminiscent of a freshly-baked biscuit, while the black bean and sunflower seed patty had a crunchy texture well complimented by cashew-based cheese. Toppings included a chipotle Thousand Island dressing, stone-ground mustard, sprouts, added to the usual pickles, lettuce, and tomato slices. If spice is your thing, the enchiladas — packed with poblano peppers — deliver with style. Filled with corn and potatoes and drenched with enchilada sauce and vegan cheese, this plate represents San Antonio's staple fare: comfort food with a Mexican accent. The refried black beans on the side finished with a subtle, smoky flavor.

Don't overlook dessert, which changes daily. On a recent visit, a coffin-shaped, gluten-free brownie called "Death by Chocolate" proved too tempting to pass on. The brownie was chewy and rich and coated with chocolate frosting and topped with chopped pecans. I ended up having to split it with my date. Other dessert options that day included an orange pumpkin donut roll, raw brownies, and an array of tasty-looking cupcakes like pumpkin spice and chocolate-chocolate chip.

Lucky for us, we arrived at the restaurant just in time for dessert happy hour, which features a buy two, get one free promotion. The orange donut roll was heavy on the orange, masking the seasonal spices one usually looks for in pumpkin desserts. I'd have preferred for the orange to have been left out altogether. The chocolate chocolate chip cupcake was loaded with dark chocolate chips and, being a mini, was a good size for anyone not looking to gorge themselves on dessert. Other dessert options included an array of tasty-looking cupcakes, including an (orange-free, we hope!) pumpkin spice. Although it wasn't available at the time, I'd like to return to try the raw cheesecake.

Gone are the days when vegans must pass up on tacos and enchiladas and delectable desserts — they just have to drive to the far end of Broadway at Loop 410. But once they get there, Vegeria allows those with special diets to enjoy all the comforting fare this city has to offer.