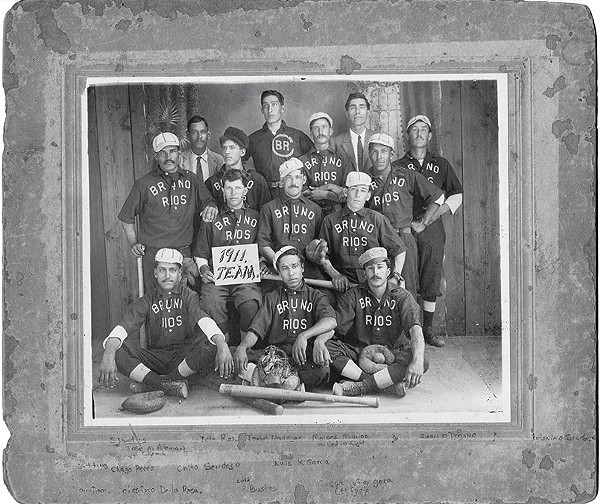 Those hardships didn't stop the 1949 El Paso Bowie High School baseball team, whose members grew up in poor Mexican neighborhoods, from beating every single anglo team in the second largest state in the country.

Bowie's is just one story, however.

All across Texas, there is a storied history of Hispanic baseball teams and leagues that came together on weekends to play America's game: baseball.

Mexican American Baseball in the Alamo Region, a new pictorial history of Mexican-American teams in San Antonio, Corpus Christi and rural areas in between stretching to the

Rio Grande Valley, tells that story through fascinating photos that give readers a glimpse of a past that's not widely shown.

The book's authors, Richard A. Santillan, Jorge Iber, Grace G. Charles, Alberto Rodriguez and Gregory Garrett, compiled the photos, which range from the late 1800s to the mid-20th century.

In the forward, Angelo State University history professor Arnoldo De León writes that he used to consider the topic as a pastime and leisure activity, but his view has grown more nuanced.

"Recent essays on Tejano sports ... have persuaded me that the baseball field is equal in importance to such subjects as community building, labor, immigration, and politics, among others," De León wrote. "These recent pioneering works suggest that much more remains to be explored."

Iber, an associate dean in the College of Arts & Sciences at Texas Tech University, noted that the book is the first to survey Mexican-American baseball in the Lone Star State.

"While it's easy to assume that ball games, especially those on Sundays, served merely a recreational purpose, there was much more to such social gatherings," Iber wrote in the introduction.

Namely, baseball served as a conduit for cultural identification for Hispanics as they faced ubiquitous racism in the Lone Star State.

"In other words, success in baseball, whether in community, scholastic, semipro, or professional leagues, was a valuable tool to show that Spanish speakers could compete effectively in a sport that most Texans valued," Iber wrote. "If they were able to accomplish impressive feats in baseball, and later softball, what else were 'they' capable of?"

A lot, as time has shown.