Mayor Ivy Taylor wants AAA baseball in San Antonio. And a new Downtown ballpark, with a cost estimated at $75 million — for now. Her announcement was not greeted with collective shouts of joy and civic enthusiasm.

For some, the baby step up from AA to AAA ball isn't much for a "city on the rise." Especially not when it means we're likely getting the team that used to be in Colorado Springs. "What about the Major Leagues?" some asked. "Shouldn't we wait until we have a shot at a real team?" And what does being minor league in baseball say about our chances for getting an NFL team, now that more than 20 years have passed since we built the Alamodome?

It's the "Downtown" part of a ballpark that appears critical to the mayor's plans. Minor league parks have emerged as key parts of downtown revitalization plans in places like Birmingham, Nashville, and El Paso. So watch for claims about how those ballparks have boosted development and downtown activity. But those cities aren't San Antonio. And our own experience with new sports facilities has been far from the best. 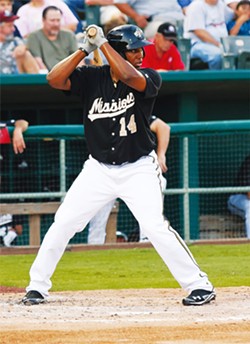 The Alamodome was touted as more than just key to getting us an NFL team. It was supposed to boost our convention business, create thousands of new jobs and spur a dramatic boom on the East Side. A 1994 consultant study for developer Zachry Realty described a "world class visitor destination center around the historic Sunset Depot," supported by an estimated three million annual attendees at the neighboring Alamodome. The San Antonio Express-News headlined the Sunset Station plans as the "dawn of historic area's rebirth" in September 1997, with the renovated complex expected to attract more than 1.7 million visitors a year.

Today, the historic depot is largely empty, the Sunset Station area mostly devoid of visitors. The entertainment complex at the Station run by the Graham Brothers fizzled, and two eateries, including Ruth's Chris Steakhouse, have left, though Smoke now occupies the space.

Then there's the AT&T Center. The regular stream of dedicated Spurs fans, Stock Show and Rodeo attendees and event-goers were supposed to boost development around the Coliseum area. Not much has happened.

So watch for a wave of promises of new development and investment, along with some real conflict over where the ballpark will actually be built. But don't expect too much.