Born and raised in Southwestern Louisiana, artist Heyd Fontenot boasts a colorful background that involves performing in rodeos, studying film at UT Austin, working behind the scenes of reality TV, directing the bygone Dallas gallery and artist residency CentralTrak and plenty in between. Celebrated for playfully provocative nude drawings, Fontenot became a familiar face in San Antonio through a 2017 Artpace residency that culminated with “Unnatural Urges,” a cabin-like installation that doubled as a film set and invited visitors inside to behold its eccentric decor. While at Artpace, Fontenot fell under San Antonio’s spell. “I vibe on San Antonio really hard,” Fontenot confessed. “It feels right to me.” So, after a previously arranged two-year stint in Oklahoma in conjunction with the Tulsa Artist Fellowship, he returned to San Antonio to pick up where he left off. In residence at the Sala Diaz offshoot Casa Chuck (named after late local artist Chuck Ramirez) since October 2019, Fontenot has been focusing his energy on an ongoing project dubbed The Lodge of St. Reborlaro — an art-centric gathering place dedicated to three tenets: community, mental wellness and spirituality. With a named that references Pentecostal evangelist Oral Roberts (spelled backwards), Fontenot’s Lodge will be the subject of an exhibition set to open this fall at Blue Star Contemporary.

Your bio indicates your work borrows “themes and images from fraternal secret societies, rodeos, brothels, places of worship and interior design showrooms.” Can you give me a few examples?
Well, my Artpace residency exhibition is actually a good example, because I was drawing on this bar my dad used to go to that was in a trailer house in my hometown [laughs] … And the back room was kind of like my take on an opium den. I’ve never been in an actual opium den but, through cinema or literature, I might have some notion of an opium den and I find that fascinating subject matter. All my forays into the dark arts or witchcraft would [also] be mostly based on literature and history. … But then with the rodeo stuff, every weekend of my childhood until I went to college, my family went to rodeos. My brothers and I performed [as ropers] in rodeos and my dad was a pro rodeo cowboy in the ’50s and ’60s. So the imagery I take from that stuff is based on my life experiences.

Were you good at roping?
I went to the state finals every year. And I qualified for the national finals. It wasn’t a great love of mine. It was kind of like those difficult queer stories you hear about how some parents can’t deal with their queer son and so they take them hunting or make them do sports. And that was my experience too. I didn’t hate the rodeo, but it wasn’t anything I was super drawn to on my own. It was just a way for me to get along with my dad. … I actually got a scholarship to go to college through my rodeo stuff. … But I didn’t rodeo when I went to college; I studied art. It was kind of the start of me being more who I was.

Artforum characterized your nude portraits as “too cute to be scandalous.” Do you agree with that assessment?
Actually, that is by design. When I recognized that I wanted to work with the nude as subject matter, I realized just how tricky that was going to be … because I didn’t want to shy away from full-frontal nudity. I had to figure out a way [to make it] serious [but] playful. I would attribute that strategy to a survival technique as a queer person … because as a queer person, some people see you as a sexual predator, as a pervert. We’re always sort of on trial for our morality.

What can you tell me about your video project Flaming Critters?
It’s inspired by the work of two other artists, people I might refer to as my aesthetic queer ancestors: Kenneth Anger and Jack Smith. Flaming Critters is a pretty direct reference to Jack Smith’s [experimental film] Flaming Creatures. … It’s all improvisational. There are production notes that I make for particular vignettes … [and] even storyboards. But there’s no on-camera dialog or script in the traditional sense. Part of that is because I have a background working on commercial films and I’m disappointed by the lack of creativity in the process. … The last television show I worked on was called Swamp People and that was probably in 2009. It was a reality show on the History Channel and it’s about alligator hunters. We would get notes from the office in New York about how they wanted it to run, [even though] they had not spent any time with these hunters. And they were dictating based on a template they conceived. It’s not anything like a documentary, it’s really like, “How do we fashion this and mold it into segments of television we sell advertising for?” In my own studio practice, I’ve decided to go against all of those formulas because I find them to be very limiting and also sort of unfair to the medium. 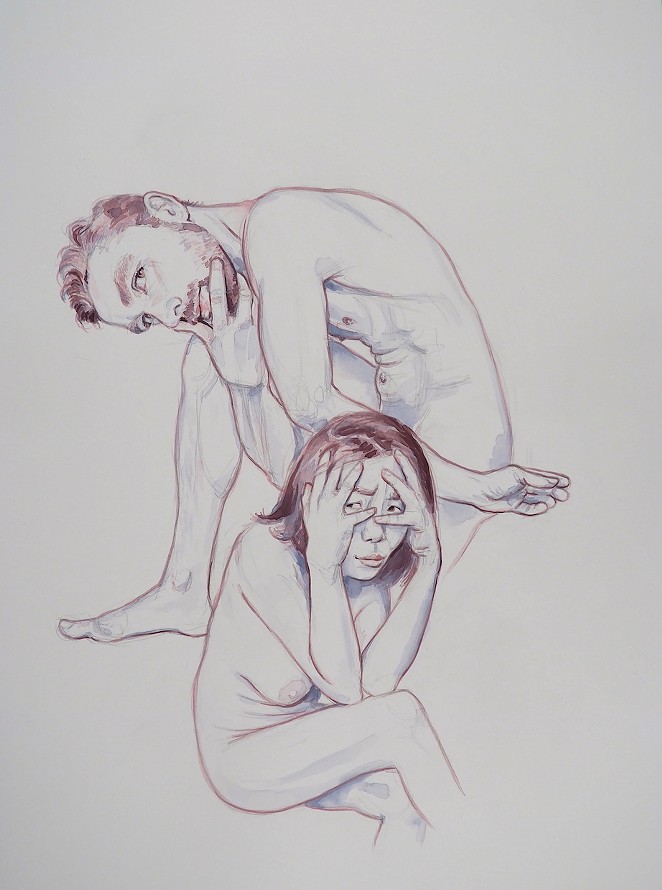 There’s a prevalence of queer issues in your work and you titled an exhibition “Homosexuals Are Ruining My Life.” Do you consider yourself an activist?
I would say that my work is political, and I would say that I’m an activist … and I think I’m most effective as an activist in my studio practice. That is where I feel I have found my voice, and where I want to exist an activist. And actually, that title, “Homosexuals Are Ruining My Life,” was something I like to do, where I take a phrase and turn it around. When that was conceived, there was a lot of hysteria around gay people being able to marry. And people would say, “They’re going to ruin the institution of marriage.” And I was thinking, you’re the only person that can truly ruin your marriage. … So, I took that phrase because I was thinking about personal accountability. … How is someone else’s life affecting your life? And how is anybody having rights lessening your rights?

What stands out from your Artpace residency?
I loved being at Artpace and I think it’s such a tremendous resource — not just for the artists that get to do it but for San Antonio. I feel like that program connected San Antonio to an international art world. Austin doesn’t have that. Dallas doesn’t have that. Houston kind of has that with the CORE program. … It was a very unique opportunity to build something like that, and also having the administrative support and the money and the 24-hour access to that facility. I would work until seven in the morning.

What sort of work have you been making at Casa Chuck?
[It’s a] project called The Lodge of Saint Reborlaro. … The idea is to create a community platform and a place for artists to gather with certain intentions … And the tenets are community, mental wellness and spirituality. Katie Pell was going to do a project with me, and her illness cut that short. But she left instructions for a program, and I want to pursue that once I get the space sort of worked out.

What was her vision for it?
Katie Pell’s project was something that she put into practice with the art classes she taught, which [went something] like: “I want you guys to pair up, maybe with somebody you don’t know very well. And I want you to sit with each other with your knees four inches apart. And I want you to look at each other.” She called it “eye bathing.” Things like that are so rare in our culture. We don’t even do that with our partner — where you just sit and look at each other. I’m hoping that just by providing the space, people [will] start to look at their lives in a different way … I think art openings and the socializing that goes along with that is wonderful because you get to see your friends and it’s a party environment. But it’s also somewhat limiting in that you’re often not very quiet with the work that you’re seeing. … Part of my Casa Chuck residency is meeting people, becoming somewhat familiar with the community and soliciting participation in the lodge. Because I don’t want to do all the programming myself. I want it to be a reflection, truly sourced and generated from the community.

Do you see that as being a temporary or long-term project?
I would welcome either. And I know this won’t be for everyone. I know some people are really uncomfortable being quiet. Or they poo-poo any sort of venture into metaphysics or spirituality. But I would love it if San Antonio responded and found it valuable. I would love it if it became a regular thing and it stuck around. And I think that will really be reliant on who gets involved.