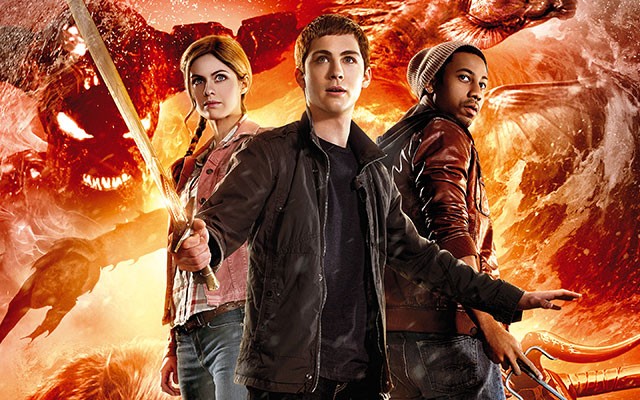 While it may not have the incredible roster of top-shelf British thespians that graced the Harry Potter films, this second installment in the Percy Jackson series, based on the series penned by SA’s own Rick Riordan, makes the savvy choice to fill its supporting ranks with dependably entertaining character actors. Stanley Tucci, Nathan Fillion, Anthony Head and Ron Perlman show up as colorful cameos for the gaggle of half-blood demigod teens who are on a quest to find the Golden Fleece.

Quick on its feet, Percy Jackson: The Sea Of Monsters launches our titular hero (Logan Lerman) rallying his friends (Alexandra Daddario and Brandon T. Jackson) on a voyage into the Sea of Monsters (aka The Bermuda Triangle) in order to retrieve the fleece and use its healing powers on the tree that protects the half-bloods' magical encampment. That means facing off against a giant mechanical bull, Charybdis, cyclops and Chronos, the big daddy evil titan who threatens to devour the gods of Olympus and all their children. This mayhem comes courtesy Luke (Jake Abel), the disgruntled son of Hermes, who just can't get over his daddy issues.

In addition to saving his demigod besties, Percy also discovers that he has a half-brother, Tyson (Douglas Smith), who just so happens to be a half-cyclops.

Though the humor and effects are inconsistent, the overall package is sharply paced and good-natured, never bogging down to rehash the events of its predecessor and instead jumping into the action at hand. There's a cleverness to the plotting that pays just enough homage to Greek mythology while still finding its own sense of adventure. Percy's world may not have the complexity and layered emotional themes of the Potter films, but it also doesn't fall into angst or despair.

The kids are all blandly likeable, with Smith making the best impression as Percy's eager-to-help half-bro, but it's the adults that really pop. Tucci is wonderful as the disinterested headmaster Mr. D (as in Dionysus), who has been cursed by Zeus to see his favorite wines turn into water before drinking them. Head steps into Pierce Brosnan's hooves as the centaur mentor Chiron, putting his many years as Buffy's watcher to good use. Perlman's unmistakable growl turns Polyphemus into something more than just another one-eyed pixelated monster. But it's Fillion who steals the show in a brief scene as Hermes, oozing charm and charisma while managing to drop in a Firefly reference.

Director Thor Freudenthal may not have much of a cinematic resume at this point (Diary Of Wimpy Kid is his biggest claim to fame), but he clearly understands how to orchestrate an undemanding film that connects with kids. After recruiting Chris Columbus (the first two Harry Potter films) to direct the first Percy Jackson film to mediocre effect, it's as if the producers have come to understand that the series is never going to achieve the iconic status of the boy wizard. Percy Jackson: Sea Of Monsters is solidly entertaining family fare and there is certainly no shame in that.

Opens Aug 7 at Santikos locations (except the Bijou)