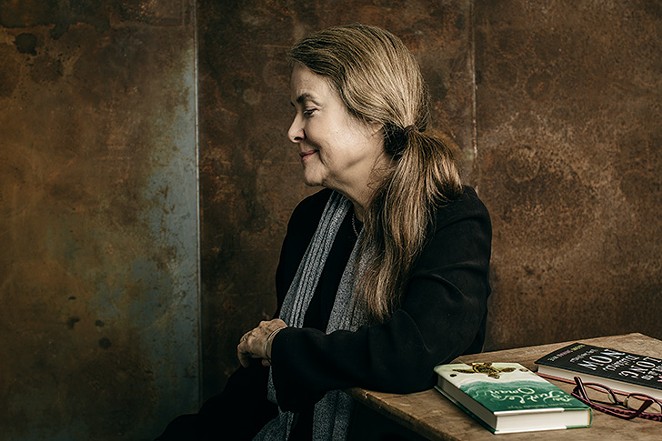 Many Texans — myself included — were fortunate enough to become familiar with esteemed Palestinian-American poet, author and educator Naomi Shihab Nye quite early in life. Beginning in the 1970s, Nye led youth poetry workshops and brought warm, playful energy to classrooms near and far as part of the Artists in Schools program. Based on conversations with friends, I can confirm that I’m not the only one who cherishes the memory of sitting in a circle and watching Nye sing her original tune “The Rutabaga Song” — a quirky earworm from her 1979 album Rutabaga-Roo (I’ve Got a Song and It’s for You). A visit from Nye meant not only a break from the doldrums of desk time, but an uplifting spell with an adult who was likely cooler than the teacher — and better at connecting with kids.

Now four decades later, the self-professed “wandering poet” has authored or edited upward of 30 volumes — including poetry collections for children and adults alike, novels for young readers, short stories and picture books — and earned numerous awards and accolades along the way, such as Guggenheim, Lannan and Witter Bynner (Library of Congress) fellowships, a Lavan Award from the Academy of American Poets and four Pushcart Prizes. Often placing themes surrounding Jerusalem, immigration and Arab-American identity in relatable, imaginative contexts, her works include the collection 19 Varieties of Gazelle: Poems of the Middle East (2005), the novel The Turtle of Oman (2016) and this year’s The Tiny Journalist — a collection inspired by Janna Jihad Ayyad, a young Palestinian activist who began using her mother’s smartphone at the age of 7 to report on the Israeli–Palestinian conflict.

On Tuesday, Nye’s long list of credits became even more impressive as she was named the 2019-2021 Young People’s Poet Laureate by the Poetry Foundation, the Chicago-based organization behind Poetry magazine. Designed to “celebrate a living writer in recognition of their devotion to writing exceptional poetry for young readers,” the two-year laureateship comes with a $25,000 prize and will see Nye bringing poetry to geographically underserved or rural communities through readings and recommending new poetry books to young readers (via poetryfoundation.org) every month beginning in August.