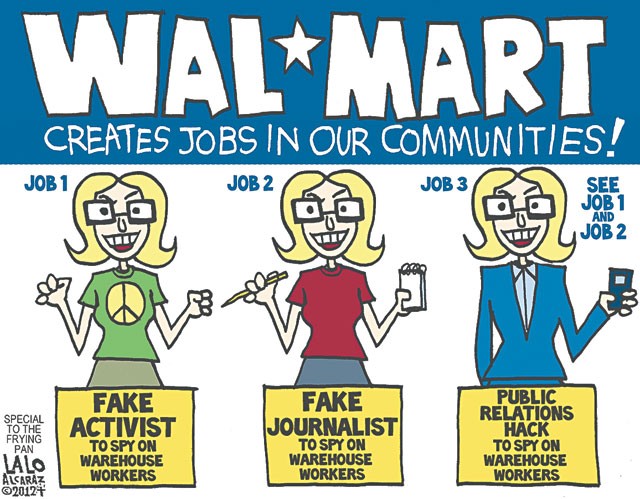 Lalo Alcaraz: I am the Juan Percent

If you were following the 2012 Presidential Election, then you've probably heard of award-winning political cartoonist and Chicano prankster Lalo Alcaraz, who made national news when candidate Mitt Romney pinched Alcaraz's 1994 satirical concept of "self-deportation" as an actual campaign plank during the Presidential debates last fall.

Alcaraz, who eloquently addressed Romney's plagiarism via interviews in the national media, scarcely hinted that at the time he was mercilessly skewering the former Massachusetts governor through the fake Twitter persona, Mexican Mitt. Before the election season was over, however, Mexican Mitt had launched more than 12,000 razor-sharp tweets snapping at Romney's heels over such gaffes as the 47 percent remark, the Univision spray-tan debacle, and the infamous "binders full of women."

Mexican Mitt, who proudly declared, "I am the Juan Percent," showed more spunk and imagination than his real-world counterpart. And whereas Romney downplayed his family's ties to Mexico, Mexican Mitt referred to himself as "the most Mexican man in America." With a Nortec-flavored campaign video and tweets such as "I am in it to Güin it," "I support Güey marriage," and "I'm not a Mexi-can't, I'm a Mexi-won't," Mexican Mitt presented a more interesting candidate than the real Mitt for President of the "United Estates."

Unlike Romney, Mexican Mitt remains popular in the twitterverse and was trailing just behind the Twitter account @god this week in the Best Fake Account category for this year's social media Shorty Awards.

Alcaraz is a big fan of social media.

"Having the ability to be a quick strike force and respond immediately to some issue or event is really nice," Alcaraz said. "I love that." And while Alcaraz only recently "fessed up" to being Mexican Mitt, this is just the latest campaign from an artist who, for more than 20 years, has skillfully used satire to enter the national discourse on politics.

Alcaraz's sense of humor can be traced to his childhood in Lemon Grove, a city 10 miles east of San Diego whose main cultural asset was a giant concrete lemon perched in the middle of its downtown. By consuming a surreal diet of Mexican television and comics, such as Gus Arriola's magnificently stylized strip Gordo, Alcaraz learned the skills to turn lemons into lemon-grenades.

During graduate school at UC Berkeley, Alcaraz started combining performance and public intervention into his artistic arsenal. The blistering student activism that surrounded ethnic studies and notions of "political correctness" was the perfect proving ground for Alcaraz, who co-founded the Chicano sketch comedy "troop" Chicano Secret Service, and the legendary humor zine Pocho Magazine while at Berkeley.

Through these projects, Alcaraz was able to address issues such as anti-immigrant hysteria, racism, police brutality, and the lack of Latino media representation to eager audiences at colleges and community centers around the country. And while other Latino artists were pushing for acceptance in the entertainment industry and academia, Alcaraz was pushing societal buttons and boundaries through a more subversive approach.

In 1994 at the height of anti-immigrant hysteria in California, Alcaraz and Pocho co-founder Esteban Zul challenged then-California Governor Pete Wilson's anti-immigrant hard-line policies by creating an even harder-lined fictitious support group called Hispanics for Wilson. Led by Daniel D. Portado ("Daniel D. Ported," Alcaraz in Hispanic drag), Hispanics for Wilson issued a press release on September 16, 2004 that called for undocumented immigrants to "self-deport." Neither Telemundo, which interviewed a deadpan "Daniel D. Portado" on international television, nor Pete Wilson, who later espoused self-deportation, realized they'd been had until it was too late.

Although Alcaraz was surprised to have self-deportation resurface last year, he thinks Romney's defeat was a sign of positive change.

"The whole country is rejecting these backwards ideas," he said.

Hear Alcaraz talk about Mexican Mitt, his controversial political cartoons, his award-winning comic strip La Cucaracha, and his website pocho.com (for which this writer is a contributor) at the McNay on Saturday. Alcaraz's presentation is part of the "Estampas de la Raza: Contemporary Prints from the Romo Collection" exhibition which ends its run on January 27.