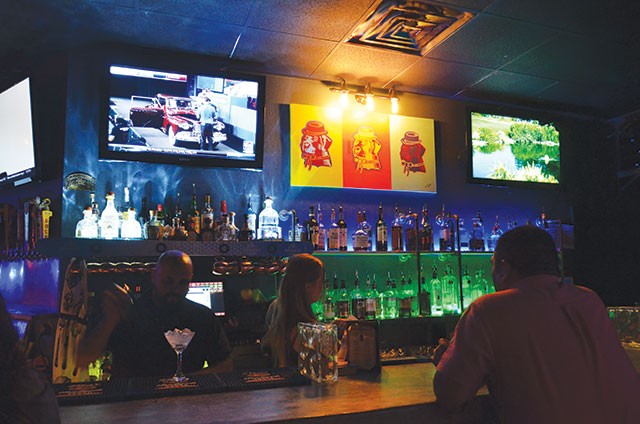 Rocky was a chocolate Labrador in his early teens when he passed away in April. According to his namesake bar’s Facebook page, Ole Rocky was friendly, kind, compassionate, loyal, cute and “the best friend you could ever ask for.” Although he’s no longer present at the bar, those traits are still felt at this Northeast side bar.

After opening last December, Rocky’s Tavern has made a niche for itself by making its digs the place where you’d want to go with buds and relax. I recruited a friend and colleague of mine on a recent Wednesday night to a test of the bar’s billing as “a bar where you and your friends can unwind and feel right at home with our family.” Like most watering holes around the city, Rocky’s plays with themed nights on the regular. We happened to walk in just before acoustic performer Chris Lopez took the stage, but had we stopped by the Wednesday prior, we would have found a bar filled with open mic poetry, according to our bartender Amanda.

The bar is inviting. Large bar tables and comfy stools are sprinkled throughout the open space. There’s just enough room for a tiny band and two pool tables to complete the front portion of the bar. The patio, while situated smack dab in the middle of a shopping center, is also a draw, though you would have to wait until nightfall to enjoy slightly cooler temperatures. As for any bits of décor, Rocky’s is filled with images and logos of the pooch himself–from the Warhol-esque “Marilyn Diptych” print of Rocky to his wee urn that looks over the left side of the bar. Patrons ranged from their mid-20s to early 40s, and kept the bar’s even-keeled vibe from dipping into raucous territory.

On the hooch side of things, Rocky’s Tavern features a list of signature cocktails where you’ll find several varieties of margaritas and takes on the Moscow mules priced from $7.50 to $10.50 (for personal shakers). While the night could have called for a Dark & Stormy with Pyrat rum, ginger beer and lime, or one of the specials on the board such as $3 lemon drop shots or $3 Tsingtao and George Killian’s Irish Red, my eyes landed on Rocky’s Dog Drinks, a list of 17 pup-inspired drinks.

The offerings skew in one of two directions–cocktails I would gladly take down such as the Salty Chihuahua with Camarena tequila and tart grapefruit, or the Clifford, which combines New Amsterdam vodka with Rocky’s special bloody mary mix. The remaining litter is made up of even more punny drink names like the Pit Bull, Pink Bulldog, The Bitch (because obviously) and the Hunting Hound. Had I not been driving, I would have tried the Underdog, with Malibu rum, peach schnapps, grenadine sinker, 151 and a Blue Curacao for good measure. My bud was brave enough to try the Rocky Road, a sweet-as-can-be concoction similar in taste to a Tootsie Roll.

For the more adventurous set, Rocky’s does infuse their own tequilas and vodkas, and our bartender Amanda gave us proper suggestions using the cucumber infusions and coconut peach; perhaps next time.

On the beer front, Rocky’s Tavern offers a solid selection of craft brews on tap (which I used to wash down my sip of Rocky Road). Alaskan White would have been a suitable choice for the evening, but I opted to stay local with a crisp Fire Pit Wit via Busted Sandal. While prices weren’t listed on the board, my $11 end-of-the-night tab wasn’t completely alarming.

While it’s a shame I didn’t stop by Rocky’s Tavern earlier this year (Rocky gave away free kisses on Valentine’s Day), it’s safe to say his fun-loving and chill spirit lives on inside.