The first decently cool Friday night of the season provided the ideal context for local indie heroes and citizen-artists Pop Pistol to release their second LP Animal Prisms into. The songs on this aptly titled album  — which comprised all but two tracks from the set list  — are alive with a midnight wilderness that bursts out from within a purposeful precision. Always a veritable force of nature live, Pop Pistol has now reached a point where the sway of their essential influences is less evident than their own unique musical vision. From the haunting opening sample  — the word “nightmare” mumbled in singer-guitarist Alex Scheel’s trademark soul yelp  — to the meditative and swimming stillness of the closing song (new track “Nothing is Moving”), Friday’s performance showcased a band at the height of their mystical and technical power. Adding to the almost unnatural poignancy and immersive nature of the set were vivid projected images of growth and chaos (some created by Scheel himself) that helped to draw even the most distracted of attendees into the experience (overwhelmingly, however, fans and new initiates alike were mesmerized by the band’s music).

In a moving and admirably candid gesture, near mid-set Scheel performed a palpably mournful solo rendition of Neil Young’s “Hey Hey, My My,” which he dedicated to his recently passed father Paul Scheel. Pop Pistol's songs are as much for placidly contemplating the middle distance as they are for losing yourself in the rapture of spiritually driven movement. Plus — there were cupcakes.  — James Courtney (video by Jaime Monzon) 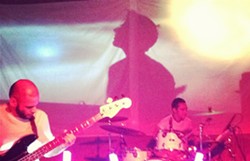