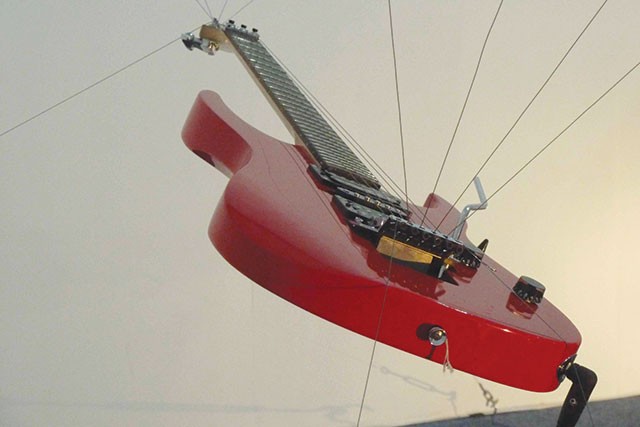 Manuel Rocha Iturbide is a sound artist, theorist and composer from Mexico City, whose exhibition “La Tensión Extendida” alights at a pop-up warehouse space on March 14, thanks to newly established residency Casa Chuck and Michele Monseau’s Three Walls Gallery. Iturbide’s sound installations and compositions as a solo artist and collaborator have been performed and exhibited internationally, including at the Biennale of Sydney, Colección Júmex (Mexico City, Mexico), and Surge Gallery (Tokyo, Japan).

“La Tensión Extendida” (Eng. “The Extended Tension,” in case it isn’t obvious) will feature several pieces, including a wall text, 4:33, a John Cage shout-out which deals with songs of a duration of four minutes and 33 seconds, and offers visitors printed takeaway text. But the main event of “La Tensión Extendida” will transform the cavernous warehouse space into an interactive musical instrument, complete with a working electric guitar suspended by strings the viewer/participants can pluck.

“They’re hooked up to an amp, so viewers will be able to hear the sound fill the space,” Monseau says. “[‘La Tensión Extendida’] is an interesting take on sound art that people haven’t seen in San Antonio, where they become sound artists, themselves.”

“The electric guitar, suspended between heaven and earth, is waiting to be born.

The strings are rays that escape the inert object.

It is an object containing an unresolved tension between the occult and the exposed,between the hidden and the revealed.

Monseau conceived of the CAM show with Mexico City-based curator/critic/lecturer Barbara Perea, who curates the exhibition, during Perea’s residence at Casa Chuck back in 2012. It’s part of a San Antonio-Mexico City exhibition exchange; this spring, Monseau will curate a show of five Texas artists in Mexico.