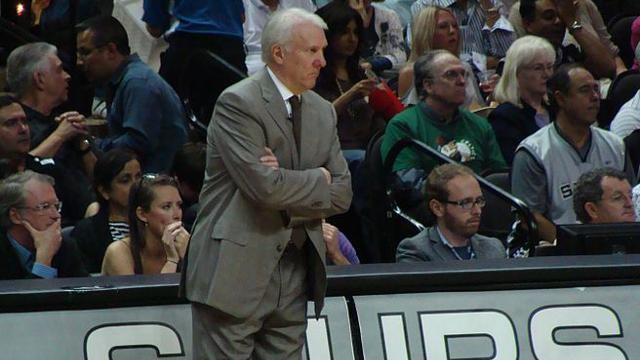 Today, Gregg Popovich won the 2013-2014 NBA Coach of the Year award and, in turn, received the Red Auerbach Trophy again this year. Along with Don Nelson and Pat Riley, this is the third time each of them have won this award. Previous wins includes 2002-03 and 2011-12 seasons, according to a press release.

During the commencement, Popovich took the time to thank his other coaches and staff. He likened the award to a team effort, rather than something of his own doing. He also recognized the owners of the Spurs, and thanked for their patience and understanding. Additionally, he paid his respects to the players.

Looks like Pop stays humble even when it comes to his accomplishments.

In the past, Popovich hadn’t dreamed of becoming an NBA coach. He had served as an assistant coach under Hank Egan, for the Air Force Academy basketball team. During the press conference, Popovich recalled he was, “fat, dumb and happy as a Division III coach.”

This coming from a guy who has won five Western Conference champions, four NBA champions, and now pockets his third NBA Coach of the Year.  Oh, Pop! Someone should give you the award for humblest man of the year.