Porcelain Gets a Modern Makeover in 'Intense and Fragile' 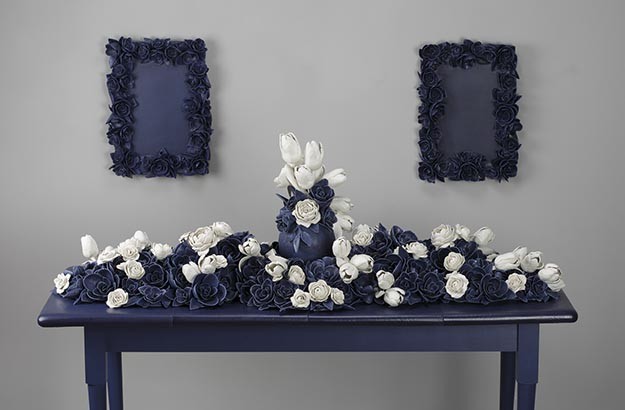 For nearly 4,000 years, porcelain has been prized for its smooth white surface, strength, hardness and utility—becoming synonymous with "fine china." But in the mid-20th century, San Antonio-born artist Rudolf Staffel pioneered porcelain as a medium for artistic expression with his translucent "light gatherers," fragile-looking ceramic sculptures that allowed light to shine through thin, luminous sections for a glowing, otherworldly effect.

Paula Owen, Southwest School of Art president, has put on her curator's hat for "Intense and Fragile: Contemporary Porcelain Sculpture," on view through January 25 in the Russell Hill Rogers Galleries. She's assembled nine artists inspired by Staffel, including two from San Antonio, who manipulate porcelain in all sorts of surprising ways to make sculptures ranging from the beautifully sublime to the extremely weird.

Tsehai Johnson, assistant professor of art at Denver's Metropolitan State University, has created a Swarm (2012-13) of giant blue teacups that would make the Mad Hatter run for cover. These 110 slip-cast and hand-built porcelain forms are mounted on the wall in a corner of the gallery, but they appear angry and out of control, drooping and spilling as they tumble through the sky like a mutant cloud or animated debris from a rip in the space/time continuum. You can almost imagine this Swarm of household objects chasing around a beleaguered housewife in a horror film, perhaps titled Teacups from Hell.

Elizabeth King provides more of a Frankenstein effect with her oddly disturbing 15-minute video, Ediolon (1999), which breathes life into a porcelain figure with large, puppy-dog eyes. Through editing and by changing camera angles, the professor of sculpture at Virginia Commonwealth University makes the figure appear to move and change expressions, reflecting her interests in early clockwork automata and the history of mannequins and puppets. In A Pocket Anatomy (Ear) (2001), a miniature ear is displayed like an object in a creepy cabinet of curiosities.

Human ears grow out of the backs of white, furless mice in Kate MacDowell's Quiet as a Mouse (Zenograft) (2011). Her work is inspired, no doubt, by a 1997 photograph of what appeared to be a human ear growing on a totally hairless mouse, which prompted protests against genetic engineering. Before Twitter or even Facebook, the photograph became a notorious internet sensation mainly by email, but the "earmouse" was really the work of Charles Vacanti and his colleagues at the University of Massachusetts Medical School. They actually seeded cow cartilage cells into a biodegradable ear-shaped mold and then implanted it under the skin of the mouse, so no genetic engineering was actually involved. But it looks even more like the demented work of a mad scientist in three dimensions.

San Antonio artist Jennifer Ling Datchuk explores her own bicultural identity—her mother is from China while her American father is a mix of Russian and Irish heritage—in conceptual assemblages dealing with issues of fragility, beauty and femininity. Human hair clusters around a porcelain drain that appears to have been removed from a concrete shower stall in Divine Beauty (2014). A woman's white porcelain gloves are stained with blood in Clean and Bleed (2014).

Ryan Takaba, the Southwest School's ceramics department studio manager, refers to the Buddhist ritual of mourning for 49 days during the transition from this life to the next in his minimalistic wall-mounted sculptures. Forty-nine candle wicks are lined up along 49 to a New (Wake) while 49 sticks of incense, mounted horizontally in porcelain holders, are stacked up vertically in 49 to New (Alight). The wicks and sticks of incense can be lit, leaving smoke marks on the wall.

Perhaps referring to the floral overkill of 17th-century still-life painting, white roses pop from a mound of blue roses in And Then It Was Still II (2012) by Giselle Hicks of Montana, maybe the most beautiful work in the show. But the real floral overload is Ying-Yueh Chuang's + (Cross) (2008), a large-scale installation of organic forms that look like the offspring of a backyard flowerbed and an undersea coral reef. Born in Taiwan and now living in Canada, Chuang also creates imaginary plant forms with Chinese Imperial Porcelain that appear to be inflated like a clown's balloon animals.

Still-life painting is also the departure point for David Wiseman of Los Angeles, whose Hare is a realistic, pure-white rabbit suspended by a leather rope ready for butchering.

Head of the ceramics department at the Oregon College of Art and Craft, Dylan J. Beck confronts environmental concerns with Detail, miniature passenger jets caught in a circle of confusion, and Center Pivot, a fake cloud floating over fake turf.