Given that it’s as old as the hills, including the ones in ancient Egypt, portraiture might not seem like an apt vehicle to convey contemporary ideas. But the age-old tradition has evolved continuously — eschewing self-aggrandizing displays of power, wealth and beauty to become a wildly adaptable storytelling device.

“The most famous portraits have this static sense to them. The point of painting the portrait wasn’t necessarily presenting this huge, broader narrative,” explained Jacqueline Saragoza McGilvray, curator and exhibitions manager at Blue Star Contemporary. “But a lot of these portraits — Dutch portraits, English portraits, the Mona Lisa — are commissioned portraits. I think that’s an important distinction to make.”

Noticing a wave of contemporary artists creating portraits informed by personal narratives and collaboration, McGilvray set out to organize “The Sitter,” a wide-ranging exhibition exploring portraiture through the work of 13 artists.

“I was seeing a lot of artists give a great deal of agency and decision-making to their subjects,” she said. “That really is what started me down this path. … It’s predominantly a mix of painting and photography, which of course both mediums have longstanding traditions in portraiture. … There’s also the through line of the artist activating portraiture as a way to [explore] somebody’s cultural background or their own personal narratives and histories.”

In the midst of a busy install, McGilvray walked us through “The Sitter” and shed light on a few of the stories behind the work.

There’s plenty of visual enjoyment in “The Sitter,” but many pieces take on deeper meaning with a bit of context — including the work of Zora Murff, Natan Dvir and Madison Cowles Serna.

Based in Arkansas, Murff created his photographic series “Corrections” while working as a tracker for Linn County Juvenile Detention and Diversion Services in Cedar Rapids, Iowa. Described by Murff as “an examination of youth experience in the system,” his series is represented by two poignant photographs of juveniles in his charge.

“What he’s doing is really at the forefront of how photographers work responsibly and collaboratively with their subjects,” McGilvray said. “In none of the images can you see the subjects’ faces. … [His work shows that] a portrait is not just an image of an individual.”

“I wish to confront and dispute the widespread misconceptions and stereotypes of the people within my own country who I was brought up to consider more as foes rather than as allies,” Dvir explained in an interview with the photography site LensCulture.

A Wyoming native who now calls San Antonio home, artist Madison Cowles Serna seeks to amplify the voices of rape and abuse survivors. For Withstand, she collaborated with 16 survivors of sexual assault on a monumental painting on repurposed billboard vinyl. In addition to allowing each of them to select the photograph she worked from, Serna invited her subjects to share their stories through letters she incorporated into a text-based sculpture.

“[Her subjects] have a lot of agency,” McGilvray said. “They choose how they’re represented, [and] that is really driving the whole composition of the work.”

Through deft use of mixed media, San Antonio artists Ruth Leonela Buentello and Sarah Fox both push their untraditional portraits into installation territory.

Based on family snapshots, Buentello’s large-scale paintings Gamer Niñas and The Last Supper are lovingly framed in ruffled fabric and hung atop wallpaper. 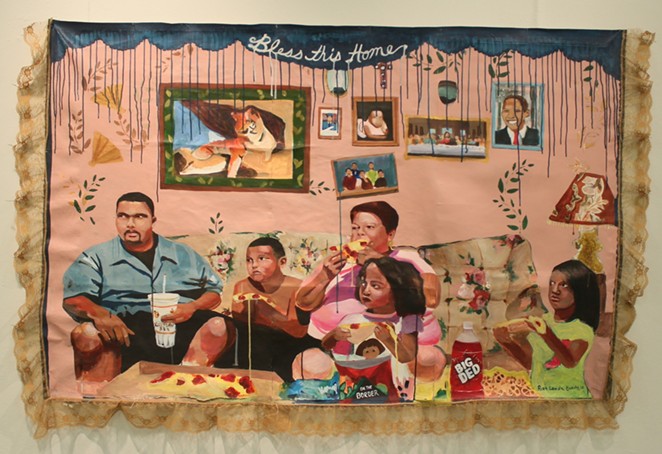 “These two paintings are pretty rich with objects,” McGilvray said. Describing the enrapt subjects of Gamer Niñas, she continued, “It feels like these girls are really in their own space and really have ownership of that space — their headphones and their dolls and posters on the wall. To me, that also is about the objects that we use to define ourselves.”

Riddled with anthropomorphic rabbits, Fox’s contributions include drawings, a digital video, a set featuring a creepy bunny puppet, a mirror, cans of Lone Star and a faux finish the artist painted on the wall. Fox, who was installing her work during our visit, explained that the project addresses cycles of addiction and family trauma.

“I use a lot of humor in the work to try to make that stuff more approachable to talk about and less scary,” she said.

Delightfully quirky and cartoony, Huynh’s paintings show his adorable mother slicing fish, preparing pho and clutching a cowering dog in the midst of a storm. As McGilvray explained, Huynh left his dog in his mother’s care when he went to college, and the pair formed a bond. “[The series] talks a little bit about empty nesting … [and the dog is] a humorous stand-in for him too,” McGilvray said.

A self-described painter and storyteller, Johnson paints people and places in an exuberant style. Among her featured works is The Octagon Room — a densely packed painting that offers a fisheye view of a Black community gathered in celebration. It seems to divulge something new with each glance.

“[The Octagon Room] is inspired by her upbringing and people opening their homes or businesses as a community space — and all of the things and conversations, the exchanges, the life that unfolds in a space like this,” McGilvray said. 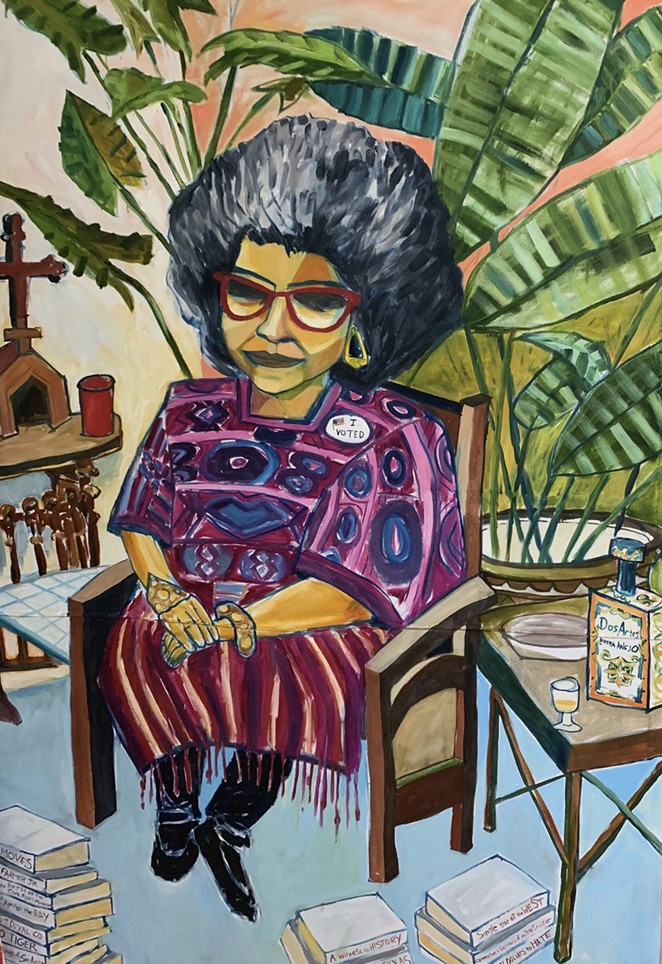 Once better known for graphic screen prints, Ortiz has been taking portraiture seriously lately and even documents his live sittings. In addition to countless portraits of his wife Olivia, Ortiz has put his signature spin on San Antonio personalities including artists Jesse Amado and Alejandro Diaz, and politicos Julián and Joaquin Castro. A shining example of this new chapter is a portrait of scholar, educator and author Ellen Riojas Clark.

“In a sense, he’s talking about making a record of these people that are significant figures in their communities,” McGilvray said. “And by creating images of them, this is one way to also insert them into art history.”