Portugal. The Man tumble in the Texas rough 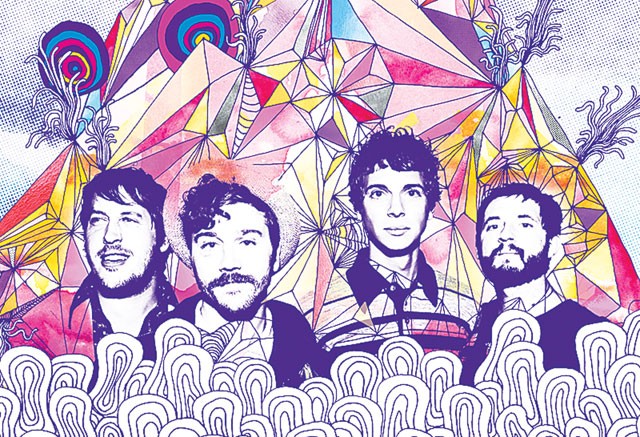 Back in 2010, Portugal. The Man (intentionally punctuated) got roughed up by Texas and were better for the wear. Sort of. The band booked the famed Sonic Ranch recording studio in Tornillo, near El Paso but nearer to Mexico. The Portland-by-way-of-Wasilla (yes, that Wasilla) quartet couldn’t unite their vision in the studio. “Every time someone posed an idea, another person said, ‘No, I don’t like that,’” said drummer Jason Sechrist, 31. “It was a ‘too-many-cooks-in-the-kitchen’ situation.”

The problem was understandable. Portugal. The Man have partly built their reputation as being the blue collar indie band to end all other blue collar indie bands. They’ve released LPs annually since 2006 (and a smattering of EPs), each of them exploring what Sechrist described as Abbey Road-era songwriting “without borders.” They offered the Zeppelin-flavored Church Mouth in 2007, the psychedelic rock and soul laced Censored Colors in 2008, and the 2007 electronic EP It’s Complicated Being a Wizard, featuring a 23-minute opening set piece followed by the same tune divided across nine more tracks, among others.

Plus, Portugal. The Man logged over 800 shows in five years. To put that in perspective, consider the road hogs Dave Matthews Band. In January, Annie Lowery (of Slate) logged DMB as having played 1,692 shows in 18 years. At Portugal. The Man’s annual rate, they’ll log the same amount six years faster. The band quits working for about a month every December.

So while having a creative block was reasonable, Portugal. The Man were in a jam. Their Sonic Ranch sessions were their first for major label Atlantic. If there was a time they needed to perform, it was then. Meanwhile, Portland native Sechrist was getting squirrelly in the desert. Feeling like he’d do anything to shoot the breeze with a bartender, record store clerk, or barista.

“I like Austin, Dallas, and San Antonio,” he said. “Had me some good times [at those cities]. [But] it was real dry and real dead quiet out there. So we shot guns.”

Sonic Ranch boasts 1,700 acres; shooting some water bottles with some high caliber pistols was no big whoop. “Yeah, man, we shot a few rounds,” Sechrist said, the tone begging “How Texas am I?” A frustrating commentary on perceptions of the Lone Star State. “I mean, I don’t shoot guns, I’m from Oregon,” he continued. “[But] I fired this massive Dirty Harry thing — blaow!”

The recoil left him spitting a sliver of tooth out of his mouth, but he found the experience cathartic, describing it as “trying to open up my mind to … the spirit of Texas.”

Portugal. The Man eventually found their groove, but only after hitting the road again. They recorded pieces of their space-pop In The Mountain In the Cloud in Europe and in various stops in the U.S. The record marks their first time working with celebrity studio figureheads. Producer John Hill (Santigold, M.I.A., Kings of Leon) provided some much-needed discipline, while living legend Andy Wallace (Nevermind) took mixing duties. They bonded with Hill over Steve Winwood, Paul McCartney, and punk rock. Sechrist credited Wallace with taking In The Mountain “from an album to a film.”

The experience was another step in Portugal. The Man’s journey towards achieving a Brian Eno-level of carte blanche creativity. “We’re still trying to find ourselves,” Sechrist said. “Maybe in an album or two.” •