May 22, 2014
comment
Down in speculation city, when news broke that Mayor Julián Castro may be tapped to serve as the next head of the U.S. Department of Housing and Urban Development (HUD), it spread like wildfire and fueled national conjecture over whether the potential role will help him secure a spot as a vice presidential nominee on Hilary Clinton’s possible presidential ticket in 2016. President Obama is expected to ask Castro to take over the federal post in the coming days, and signals point to the mayor accepting the position. 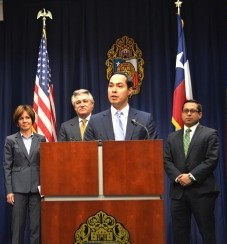 It wouldn’t be the first time Obama asked Castro to join his Cabinet—in 2012, Castro turned down an offer to be transportation secretary, saying he’d prefer to stay put in SA. It also wouldn’t be the first time a San Antonio mayor was tapped for the federal housing gig—former Mayor Henry Cisneros served as the secretary of HUD under the Clinton Administration from 1993-1997 (however, that appointment came three years following his last term as SA’s mayor.)

“The Mayor isn’t commenting on the process. If and when the White House makes it official, he’ll comment at that time,” wrote Jaime Castillo with Castro’s office, in an e-mail message to the Current.

But as national media ponders Castro’s political future, the City of San Antonio is left predicting its own without the mayor. While San Antonians grapple with seeing Castro as either a political opportunist deserting his city or an accomplished, nationally recognized hot shot making the next logical ascension in his career, councilmembers have their own, more pressing issue to grapple with—finding a new leader.

If Castro makes the jump, an interim replacement would come from within the 10-member council itself. Six votes among the members would secure a new, temporary mayor until the May 2015 mayoral elections. (Castro had the chance to run a fourth term next year, serving through 2017.) The shakeup also makes way for a replacement for the open council spot (also filled by a majority vote of the remaining members, as per the City Charter.) The special election for the permanent spot would occur in the next uniform election, so in this instance, November.

In the meantime, the potential mayoral job opening has council members—and one state representative— mulling over their chances of leading the dais.

San Antonio Democratic state Rep. Mike Villarreal, who has has served in the Texas House for more than a decade, tells the Current he would make a move in the 2015 race if Castro stepped aside.

“This speculation is somewhat premature. There's only room in this town for one Mayor, and Mayor Julián Castro is our guy,” said Villarreal in an e-mail message. “If he does have the opportunity to serve in Washington, I will run for Mayor.”

“The guiding mission of my public service for 15 years has been to help make Texas the greatest place to raise children who are healthy, educated and prepared for the future. If Mayor Castro departs for Washington, I will focus my efforts on the community I love, our hometown of San Antonio,” the SA native added.

For council members, the choice is whether to run in 2015, run in for the appointment or shoot for both, if Castro does make his exit. While he’s still relatively new to council, some see District 8’s Ron Nirenberg as a prospective contender. Nirenberg says he’s received several calls from constituents in and outside his district to make the bid.

“I believe we need a strong leader and if my colleagues see me in that light, I would be honored to serve the citizens,” Nirenberg tells the Current.

“We’ve built such momentum over the last two administrations with Mayor Castro and Mayor Hardberger, so it’s critically important to sustain that momentum during this interim,” says Nirenberg. “And the reality is we’ve got such important items to address in the near term, so we need to focus on those issues,” he says, pointing to water, collective bargaining, job creation and long-term transportation needs.

Another would-be frontrunner in the mayoral search is District 1 councilmember Diego Bernal, who says he is considering throwing his hat in the 2015 race. But Bernal is opposed to the idea the placeholder should also campaign for next year’s race, describing it as an “unfair” running start. Under that logic, Bernal says he “absolutely” would not consider serving in the short-term.

“I don’t believe that anyone in the interim position should be campaigning for the seat that they weren’t elected to by a vote from the people,” he tells the Current. “It also allows the person to focus on the work, which is the most important thing in front of us.”

District 6 councilman Ray Lopez, elected in 2009, similarly expresses interest in the 2015 election but with eyes on the possible upcoming appointment, as well.

“If that opportunity were to materialize I would certainly submit my name to Council to replace him in the interim,” Lopez tells the Current. “And if you are willing to be mayor in the interim, then the City deserves to have that person continue to be mayor well in to the future. So, if I were to be nominated by my colleagues, I would intend to be a candidate in 2015.”

If Castro gets the HUD appointment, who will be SA's next mayor? Photo by Mary Tuma

District 5’s Shirley Gonzales, on the dias since 2013, says she wouldn’t rule out the appointment or a mayoral run in 2015 but insists she’s enjoying her current post as councilmember, “I’m staying focused on making an impact in my district but I would also never rule out the possibility in 2015 and beyond,” she says.

“I know everyone is interested, enthusiastic and feels equally qualified for the appointment, so right now we are waiting on direction from the mayor,” says Gonzales.

Council member Rey Saldaña, representing District 4, hasn’t excluded the appointment bid or next year’s race as a possibility either, but says it’s a matter of timing.

“I would like to be mayor one day,” he tells the Current. “But for me, I have more patience on when that will be. I think some folks feel like it’s 2015 or die but I’m more interested in the long-term picture.”

He’s willing to replace Castro and at the same time, also prepared to make way for someone that may be better suited, in the view of council. “I wouldn’t say no to the appointment, but I could put my own personal goals aside and support someone else interested as well if [it] helped keep our collegial environment intact,” says Saldaña.

He stresses the necessity for council to devise a framework on how to select the next mayor. Proposed defining criteria could include the seniority of a council member or choosing someone who is not interested in running in 2015, “If we just throw everyone that believes they should be the next mayor in a room, we won’t make any progress. We need to hammer all this out first,” he says.

Whatever shakes out for him at the dais, Lopez considers Castro’s federal appointment a benefit for all San Antonians.

“I don’t think a better thing can happen to an individual who is so committed to public service virtually his entire adult life. This is a great opportunity for him. Having said that, there is a selfish motive for us wanting him to be successful as he moves up ranks in the federal level,” says Lopez. “It continues to take San Antonio into a positive trajectory as a ‘city on the rise’

I think he’ll give us opportunity and exposure at levels we haven’t had before.”

“[It] will allow us to leverage his understanding of our issues and ability to draw down federal dollars for a lot of very important revitalization programs here in San Antonio,” says Lopez, more specifically (and strategically).

Of course, this is all assuming Castro does, in fact, receive the appointment, accept it, make it through the Senate confirmation hearing and the federal vetting process, perhaps still months away. If all goes according to what is widely expected, San Antonio will be short a mayor and starting down a long road to securing a new head honcho.

“The good thing is that we know we at least have our mayor for a few months, but it’s sort of a strange feeling,” says Saldaña. “I’ve been on teams my whole life, and when you lose your best player—when your starting pitcher is getting called up to the big leagues—it’s a time where we all have to step it up.”