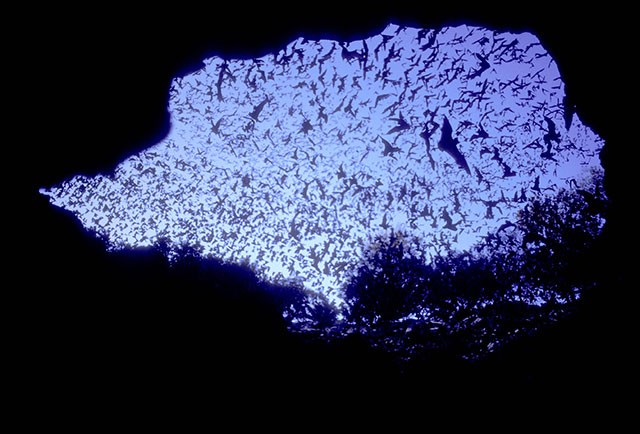 Each summer our local weathermen look at the Doppler and tell us to disregard a cloud hanging over the Hill County. No, it’s not sign of some impending rainstorm, but the nightly exodus of at least 10 million bats from their summer home.

Bracken Cave in southern Comal County is widely regarded as the largest bat colony in the world, the summer nesting and breeding grounds for the Mexican free-tailed bat. Each night, a thick column of bats swarms out of the cave to feed before retuning at dawn.

“This is a globally significant site,” said Shanna Weisfeld with the nonprofit Bat Conservation International, which owns the nearly 700-acre nature preserve surrounding Bracken Cave. “We should be careful not to do anything that disturbs it.”

“This is a unique situation, so we have nothing to compare it to,” Weisfeld said. “We simply do not know what could happen to this treasure.”

Galo Properties, the site's developer, did not return several calls for comment.

For thousands of years, BCI estimates, young bats have been born and raised in Bracken Cave, learning to fly and forage in the surrounding area. Each night, those bats eat their bodyweight in insects, some of which are agricultural pests like the corn earworm and the cotton bollworm. A 2006 study of the eight-county region surrounding the cave estimates the bats are worth an annual $741,000 in pest control. In its recently updated Texas Conservation Action Plan, Texas Parks and Wildlife designated the bat a “species of greatest conservation need.”

Building homes, streetlights, schools, and pools next door could forever alter the bats’ flight pattern, BCI worries, contending those bats may instead roost in and around nearby homes instead of the cave.

And building a subdivision in the bats’ flight path threatens to expose residents to rabies, BCI claims; while instances are still rare, bats are the primary source of human rabies infection in North America.

The proposed site also sits atop the Edwards Aquifer’s environmentally sensitive recharge zone, where our main source of drinking water gets replenished with each rainfall. Under a city aquifer protection plan passed in 1995, developments over the recharge zone can only have 15 percent of its land covered by buildings and paved roadway (so-called “impervious cover”).

“We were surprised to see they’re planning such a high-density development because of where they are in San Antonio’s [extraterritorial jurisdiction],” said Annalisa Peace with the Greater Edwards Aquifer Alliance. While some developers have managed to sneak dense developments through by exploiting a loophole that allowed certain development plans to be grandfathered without the restrictions, it doesn’t appear Galo has taken that route, Peace said. She doubts, given the density of the proposed subdivision (at least 3,800 homes on roughly 1,500 acres), Galo could build within that 15 percent impervious cover cap.

“I just don’t see how they could put that many homes in under our water quality ordinance,” she said. “We’re all wondering how, exactly, they plan to do this.” Gene Dawson, the engineer for the project, did not return a call for comment Monday.

The San Antonio Water System Board approved sewer and water hookups for the development at its March 11 meeting. At least one SAWS board member is asking that SAWS rescind that vote, saying the board wasn’t given all the necessary information when it approved extending SAWS coverage.

In a letter he wrote to the GEAA last week, SAWS board member Sam Luna explains the board wasn’t told the proposed subdivision was located in Comal County. In addition, board members were never told “that Crescent Hills is also known as Comal County Special Improvement District No. 1,” created by the Lege in 2007 by Senate Bill 2008, which was authored by then-State Sen. Jeff Wentworth. (Further research shows Luna was off by one session. Wentworth’s 2007 bill got stuck in committee. He revived the bill and passed it in 2009.)

“This bill was carefully tailored to accommodate Galo Properties and its proposed planned subdivisions,” Luna wrote. While that state law directs Comal County to create its own water and wastewater facility, to be known as the “Comal County Water Improvement District No. 1,” board members were told the burden for water and sewer hookups fell to SAWS.

“Based on this disclosure, there is no need to provide SAWS water into Comal County, “ Luna wrote.

Along with circulating an online petition (which by Monday had garnered over 6,000 signatures), bat conservationists last week called for supporters to put pressure on City Hall, thinking the City’s Planning Commission would have to approve the Crescent Hills master plan.

Bat conservationists say City leaders they’ve contacted continue to tell them Crescent Hills is not COSA’s responsibility. “We’ve been amazed by the Texas two-step we’re getting,” said BCI conservation director Mylea Bayless. “Comal county is telling us they don’t’ have jurisdiction over what happens there, while the City of San Antonio has told us that it’s not in their purview to make these decisions.”

GEAA’s Peace said she worries Galo may be trying to sidestep aquifer protections by going to Comal County  — which doesn’t mandate the strict aquifer protections that COSA does — instead of the City’s Planning Commission. “The City is totally empowered to enforce its aquifer protections in this case,” she told the Current. “And if they’re taking a pass on this, they’re handing that developer a giant Christmas present.”