Preserve The Alamo! Push Grows To Save Eroding Shrine 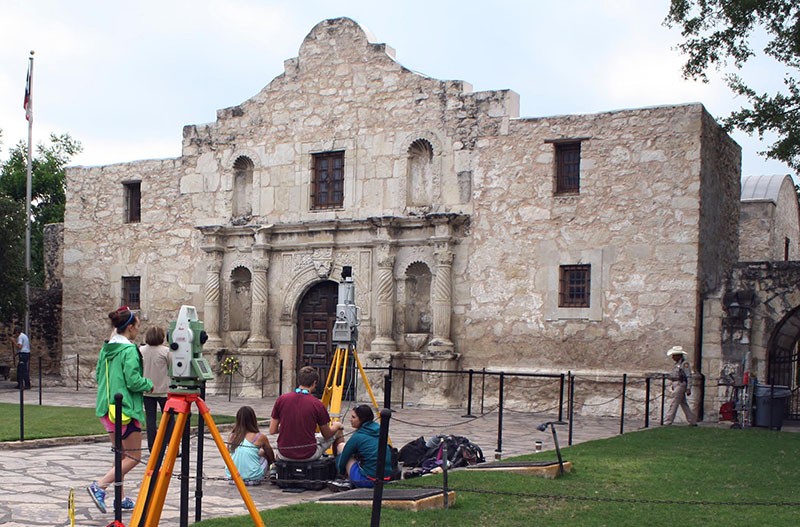 It's still standing after nearly three centuries, but Father Time has not let the venerable Alamo escape unscathed.

Over the last 55 years, a good chunk of the west façade has worn away and the compound's long barracks and shrine are suffering from erosion, a series of studies discovered.

And fixing up the ever-popular tourist spot – tops in Texas – is no cheap task.

While Alamo Conservator Pamela J. Rosser said no emergency work is needed at the site, the results of a study from Texas A&M University study unveiled earlier this month concluded that 2.7 inches of limestone has eroded from the façade.

The study was one of three that investigated everything from fixing cracks in mortar joints to digital mapping of the complex to mitigating moisture by improving drainage and replacing cement mortar with lime mortar.

The study marks the end of the first phase of the Alamo's most recent renovation project. All three studies were part of this phase, though they were independent of each other.

Now Rosser will study the reports and recommendations and create a plan with the state General Land Office and the Alamo Mission Chapter of the Daughters of the Republic Texas to address the work that needs to be done.

The Ewing Halsell Foundation funded the studies, but Rosser said money has dried up and she doesn't have additional funding for the second phase, which involves preservation projects.

As Rosser discovered, the effort is not simple.

In 2009, she found an arch that was long thought to be a doorway. There was no written documentation or description of an arch in that location, however.

"I got permission to remove the stone and mortar and once I got that out, I realized the arch was closed in by the Army. They wrote their name in there," Rosser said. "The last time it was viewed was 1848. I just have to be cautious and do tests on anything I want to remove to confirm it's OK. I don't want to lose historic material."

But even then, she won't be able to get anywhere until she gets funding to actually work on projects for phase two of the renovation plan.

Enter State Rep. Lyle Larson, a San Antonio Republican. He plans to amend a bill he filed in the House to include preservation to create specialty license plates featuring the Alamo and the word "Remember" as a fundraising effort.

If the bill is approved, the Department of Motor Vehicles reported the plates will be available in January 2016, according to Lynlie Wallace, a spokeswoman for Larson.

Larson's office put preservation costs at $5 million, but the A&M study could end up changing that estimate, since its results continue to be analyzed, Wallace said.

Even if it goes down slightly, there's no way funds from the specialty license plates would take care of the problem.

In fact, it'd be a drop in the bucket.

"We assume sales will be similar to that of the Native Texans license plate, which was created by the Daughters of the Republic of Texas in 2004," Wallace said.

But it's not just about mitigating damage from erosion. It's also about coming up with new ways to give Alamo visitors better ways to take in its historical significance.

Sharon Skrobarcek, president of the Alamo Mission Chapter of Daughters of the Republic of Texas, said the group is constantly thinking of ways for tourists and locals alike to learn a lot more about the old shrine.

"There's so much history that people don't have a clue about," Skrobarcek said. "It's mind boggling, really."

But as long as the place has been around, any changes, including improvements, don't come about easily – or quickly.

"It takes time," Rosser noted. "You don't want to rush and make a mistake."

And now there's another key player in the process whose voice could be decisive in terms of the future of the Alamo.

Dinnin, formerly with the Greater San Antonio Chamber of Commerce, spoke to the Current last week, on just her second day on the job.

She seems on board in terms of keeping the current dual priorities of preservation and education.

"Choosing between one or the other is not the discussion. It's both," she said. "Telling the story and preserving the Alamo."

Those efforts are also being considered by the Alamo Plaza Advisory Board.

That's yet another piece of the Alamo renovation puzzle: there have been calls to bring the plaza and the Alamo under single ownership — a controversial notion.

We'll soon find out if that option is on the table. The advisory board will meet in June and present its future vision of the plaza, which is owned by the city, not the GLO.

"Ideally, one entity would control the Alamo and the Alamo Plaza," said Wallace. "However, the GLO will continue to operate the Alamo and should do so autonomously," she added. So everyone agrees the need is there to do more to preserve the Alamo. How much will be done and how long it'll take remains in question.

And while concerns of erosion looming large, no one fears the iconic place will crumble to ruins anytime soon.