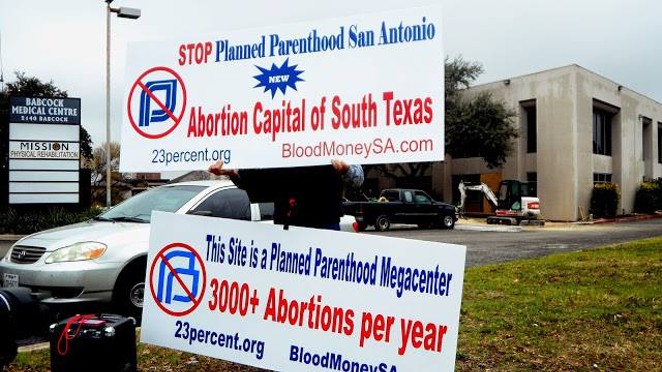 Previtera is in a runoff with former City Council member Diego Bernal. The race comes after Mike Villarreal stepped down to run for mayor of San Antonio.

Previtera joins the Stop Planned Parenthood Coalition in its 14th protest at the planned center, according to the group's news release.

These are the same group of protestors who showed up for the Martin Luther King Jr. march — like they do every year — with signs claiming abortion is a tool of black genocide.

The coalition has numerous Facebook pages that post similar content and may be administered by the same person. Here's their "Does Ron Nirenberg Want District 8 to be the Abortion Capitol of Texas?" Facebook page.

The Stop Planned Parenthood Coalition is a good fit for Previtera, who bills himself as a pro-life candidate

"I will advocate for legislation that prevents any abortion that is not performed to save the life of the Mother," Previtera says on his website.

Previtera is also a critic of San Antonio's non-discrimination ordinance, which his opponent, Bernal, pushed to amend to include protections for gender identity and sexual orientation. As Previtera puts it, he is opposed to "granting special civil rights" to homosexuals.

And that race is heating up. Out In SA reported Thursday that a group of Previtera supporters called Tejanos Against Politicos is distributing a flyer featuring two men kissing and Bernal depicted as "El Diablo."

They have a photo of the flyer, which reads:

"Diego Bernal – wants your children to be taught the homosexual lifestyle in your schools. Bernal, wrote the ordinance that allows men dressed like a woman to enter the woman’s bathrooms. He supports killing babies (abortion). He regularly voted for increases requested by CPS and SAWS. San Antonio is better than Diego Bernal. Democrat or Republican vote against Diego Bernal’s Views. Lets keep our great city decent."