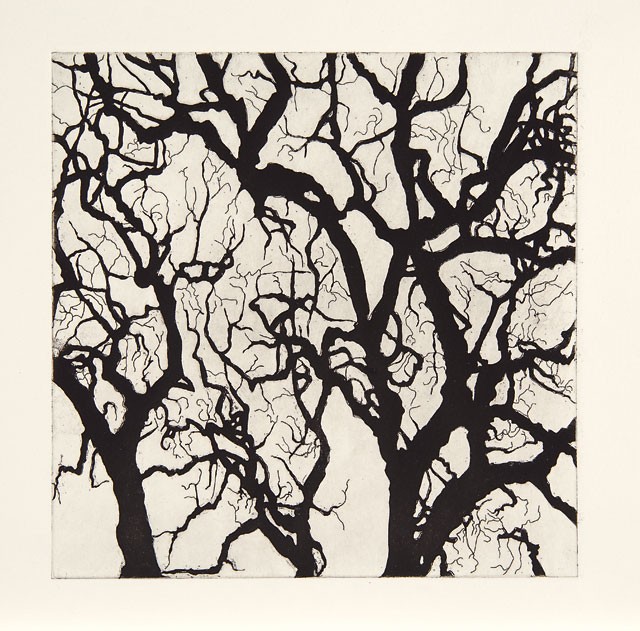 Click here to see more images from the exhibition.

Beyond the stretch of plains, past the shelter of lush forest and the heavy-handed presence of a white church, rests the simple, symbolic gesture of a cross upon the hill. Its position above the church bears much greater Texas cultural significance, neither dominating nor imposing upon the pastoral stretch of hill country. With only a passing glance however, this reference of religious hierarchy could be easily missed. The work of German immigrant Hermann Lungkwitz, Friedrichsburg is one of the earliest Texas fine art prints and could not be a more fitting representation of its exhibition.

Tucked quietly away in a single, four-walled room at the McNay Art Museum is a historical giant in the world of local art. "Printed in San Antonio" spotlights one of the longest printmaking traditions in Texas, with a collection including pieces from Kiki Smith, Nate Cassie, Jon Lee, Marie Bonner, and Bill Reily.

Lungkwitz is representative of the 19th wave of German immigrants who founded towns such as New Braunfels and Fredericksburg. It was the establishment of newspaper presses by these immigrants that sparked the printing revolution.

"At the time, there were [already] lithographic presses established in the state," said Lyle Williams, curator of prints and drawings at the McNay. "A fellow German had brought equipment to San Antonio in the mid-1850s, but they were largely commercial enterprises not capable of producing the subtle tonalities Lungkwitz wanted." Though this provided San Antonians with the first printed images to be found in newspapers in the state, it still did not meet Lungkwitz' artistic needs.

The only option for Lungkwitz was to ship his work to Dresden, Germany, known worldwide for its art production. According to lore, says Williams, "the ship bringing the edition back from Germany hit a bad storm and many of the lithographs were damaged; hence the rarity of Friederichsburg.

A venerable art history course, "Printed in San Antonio" began its inception with the acquisition of recent prints from Nate Cassie and Ethel Shipton. With both artists' works being printed here in the city, Williams began wanting more.

"This got me thinking about all of the locations prints have been made in our city over the past 150 years," Williams reflects. From Kiki Smith's San Antonio Art Institute prints to Marie Bonner's Monte Vista home studio press, printmaking in San Antonio has always been rooted in both traditional and non-traditional locations.

Many of the prints have been collected from contemporary local haunts. Hare and Hound Press, owned by a fellow exhibition artist Janet Flohr, often works closely with Artpace's residency program. Hound and Hare Press produced the exhibit's harrowing Death of a Prizefighter by Vincent Valdez, while Blue Star Arts Museum of Southtown provided an additional Valdez self-portrait etching made at Stonemetal Press.

Any art museum exhibition can collect paintings, sculptures or prints connected through a unified topic, but what distinguishes "Printed in San Antonio," Williams notes, is "we were able to acquire the copper plates used in [the prints'] production. These have already proved invaluable in talking to classes about the printmaking process." The worn copper plates are industrial ghosts, bearing the sacrificial scars of their prints and printmakers.

The rich history of printmaking is not lost on the current generation of local artists.

From a displaced German immigrant, to a Parisian-educated expat, to a resident artist, the historical merit to "Printed in San Antonio" defies much of the exhibition's layout. In mere steps, a visitor can span generations of local art, from the late Reggie Rowe to current UTSA printmaking professor Dennis Olsen, gathered from all reaches of life, that have finally come home.