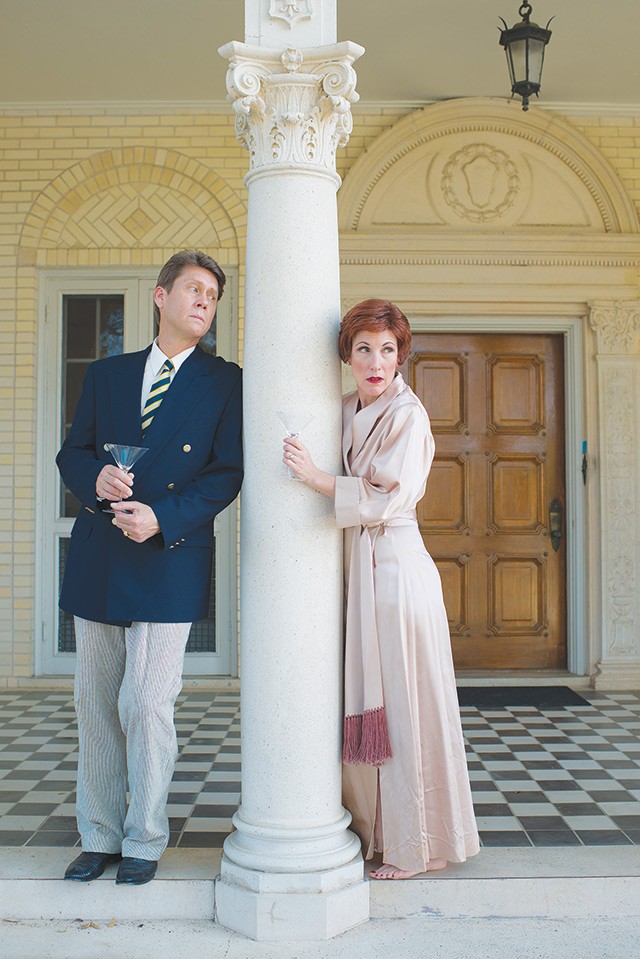 The opening of Noël Coward’s three-act Private Lives is a comic tour de force of conjugal symmetries. On adjoining terraces of a swank hotel in Deauville, two English couples each begin their honeymoon. It is the second marriage for Elyot, and his bubbly young bride Sybil cannot help but brood over her predecessor. But the more Sybil insists that Elyot compare her with his first wife, the more irritated he becomes, until the newlyweds get into an angry row. Meanwhile, Elyot’s first wife, Amanda, happens to be standing on the other terrace with her new husband, Victor. Like Sybil, Victor is curious about the spouse he replaced, but his attempts to interrogate Amanda about Elyot rankle her and lead to a bitter rift. After spying each other across the shrubbery and learning of their parallel plights, Elyot and Amanda realize that, five years after their divorce, they still love each other. The reunited exes steal off together to Paris. Exit, pursued by two unbearable new spouses, Sybil and Victor.

“We’re figures of fun,” declares Elyot, and the fun for the audience lies in the absurdity of the play’s premise and the willful silliness of its privileged characters. “Let’s be superficial and pity the poor philosophers,” says Elyot. “Let’s blow trumpets and squeakers, and enjoy the party as much as we can, like very small, quite idiotic school children. Let’s savor the delight of the moment.” Private Lives is a hedonistic invitation to make merry, to delight in the wit work of the playwright and the dexterity of the players. This is an actor’s play, and the original 1930 production featured a legendary cast–Coward himself as Elyot, Gertrude Lawrence as Amanda, Laurence Olivier as Victor and Adrianne Allen as Sybil. But the company of bickering lovers assembled by director Tim Hedgepeth–Wade Young as Elyot, Christina Casella as Sybil, Guy Schaafs as Victor and Anna Gangai as Amanda–is equal to the demands of Coward’s language as well as the plot’s brawls and clenches. Watching them hit lines and one another back and forth is as invigorating as a doubles match at Wimbledon.

The urbane Coward is not Clifford Odets or Bertolt Brecht. Though written during the Depression, Private Lives, like its characters, regards the world as merely an arena for banter. Elyot’s “eternal trivial flippancy” eventually grates on Victor, and me. The third act, lacking the sparkling invention with which the proceedings begin, sputters. But beneath the bibulous giddiness lurks a desolate vision, a closeted playwright’s cynical take on the conventions of heteronormalcy. “The woman’s job is to allure the man,” Amanda, who also emasculates her men, explains. Coward’s Elyot and Amanda can be located in the line between Shakespeare’s Beatrice and Benedick and Albee’s Martha and George. This superb production of Private Lives is a coruscating account of love as endless warfare in which no one ever wins. Or loses.