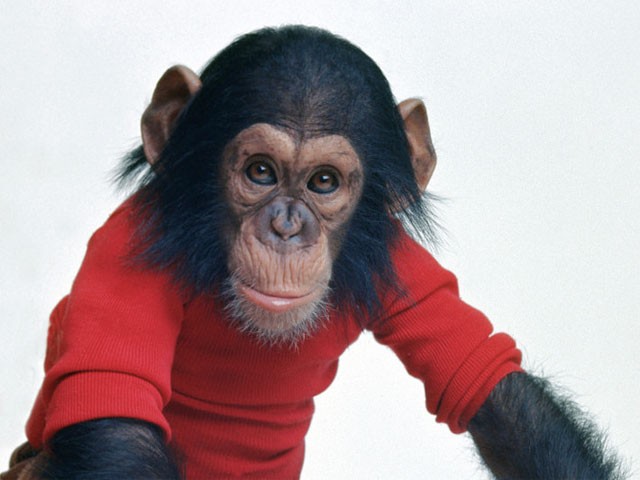 Project Nim (8pm Thu, HBO)
This documentary tells the story of a chimpanzee who was raised like a child in a misbegotten 1970s science experiment, then cruelly sent back into captivity. James Marsh’s absorbing film interviews the academics from Columbia University who plucked two-week-old Nim from his mother to see if they could teach him to communicate like a human being, via sign language. They placed him in a hippie household, dressed him in Bermuda shorts and T-shirts, and let him smoke the occasional joint. As one interviewee points out, by way of explanation: “It was the 1970s.”

It sure was. The academics were so busy sleeping with one another that they lost track of the damage they were inflicting on poor Nim. They turned him into an unhappy hybrid — not quite human and not quite chimp. Unfortunately, he was human enough to react with shock when they finally sent him back to the cage where he came from, and then to a horrific research facility to be treated like a lab animal.

Though Project Nim is about studying chimpanzees, it’s not long before your gaze turns toward the people onscreen. The whole misadventure plays like a science experiment in human behavior: How do we treat each other? How do we treat fellow sentient beings? How do we satisfy our own selfish needs without hurting someone else?

The results are not encouraging.

Amish Mafia (8pm Wed, Discovery)
We know the Amish as a peaceful, God-fearing people. Shunning modern dress and technology, they keep to themselves in rural areas with their bonnets and horse-drawn buggies.

Oh, and their assault rifles.

Amish Mafia is a reality series about the thugs who supposedly maintain the peace in Lancaster County, Pa. The Amish don’t like to go to the police with their problems, we’re told, preferring to settle things among themselves. So when there’s a dispute, a group of local menfolk play bad-asses — yes, in their suspenders, short-sleeve white shirts, and wide-brimmed hats.

The series keeps a straight face while portraying these odd-looking throwbacks to the 19th century as fearsome gangsta types. Amish Mafia might as well be a Godfather movie with its ominous music, disorienting camera angles, and slow-motion shots of devout farmhands cocking their rifles.

As silly as it all sounds, I admit that my heart will probably beat a little faster the next time I see a horse and buggy in my rearview mirror.

Love You, Mean It (9:30pm Wed, E!)
Sitcom beauty Whitney Cummings tries to make her new talk show feel like a party, with loud music and even louder guest segments. Cummings pretty much yells through the whole half-hour, delivering blunt sex and drug jokes. Cruelty is the keynote as she unloads on both celebrities and people on the street.

I’m trying to figure out why I find Love You, Mean It so off-putting. I’m a fan of Cummings’ comic forbears — Joan Rivers, Kathy Griffin — who also specialize in high-decibel insults. I think the difference is that their nastiness is largely directed at themselves or at powerful figures. Cummings often seems to be sneering at us, the little people, from her own position of power.

Love You, Mean It does feel like a party, but one you weren’t invited to.

Christmas in Washington (7pm Fri, TNT)
Conan O’Brien hosts the annual all-star special at the National Building Museum in Washington, D.C., attended by Barack and Michelle Obama and other political VIPs. The lineup is notably weak for such an august audience, with performances by lesser lights like Megan Hilty, Demi Lovato, Chris Mann, and Scotty McCreery. The only true “all-star” in the lineup, Diana Ross, is well past her prime.

If worse comes to worst, we can at least count on Ross’ hairdo to be entertaining.

Country Stars at Home (7pm Fri, HGTV)
Country stars live in modest shacks out in the country, right? Where they can “listen to them crickets chirp” and “hear that ol’ hoot owl,” as Dierks Bentley puts it in “Up on the Ridge”?

Well, no. It turns out that they live in lavish big-city apartments and mansions. This special goes into the decidedly immodest luxury homes of LeAnn Rimes, Kellie Pickler, Naomi Judd — and yes, even Dierks Bentley. It’s hard to imagine how Dierks hears “that ol’ hoot owl” in his fancy digs, unless he keeps one in a gilded birdcage.

It’s a Wonderful Life (7pm Mon, NBC)
We’ve all seen the 1946 holiday classic many times, laughing and crying as altruistic George Bailey (Jimmy Stewart) fights to save his Building and Loan from the evil banker Mr. Potter.

But after the recent presidential election, in which billionaires mounted a brutal campaign to preserve their advantages, I think we’ll want to tune in again. Suddenly, Mr. Potter is relevant to 2012.