Prost! like a pro: Here’s your survival guide to the San Antonio Beer Festival 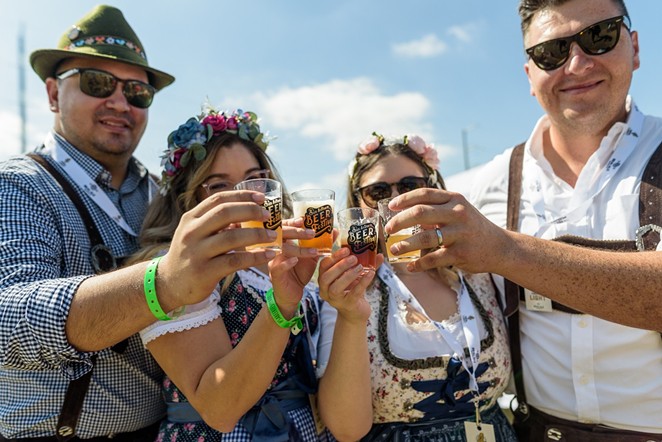 The San Antonio Beer Festival is nearly upon us, pouring 400 beers from more than 100 breweries into one single-day event.

If it sounds like a lot to take in, well, that’s because it is. After all, we’re talking about Texas’ second-largest, single-day beer celebration.

Every year, thousands of thirsty enthusiasts converge at the event to sample unique casks, one-of-a-kind collaborations and a dizzying array of brews from porters and stouts to ciders and sours. This year, the festivities take place at Crockett Park on Saturday, October 16. Tickets and more details are available at SanAntonioBeerFestival.com.

As Beer Fest veterans, we wrangled together a list of dos and don’ts that will help you get the most out of the festival without being overwhelmed by the sheer volume of options.

DO be courteous
This one comes first because it’s the most important. Simply put, don’t be a dick. We’re still grappling with a pandemic, so be aware of your surroundings and other festival attendees by practicing social distancing and general human decency.

DO try new things
We all have our favorite brews, but given the array of far-flung breweries represented at this event, now is the time to venture outside your quaffing comfort zone. Try a new brewer. Try a new style. A good rule of thumb for festivalgoers: if you can find it at your local grocery, convenience store or watering hole, move it down on your must-taste list.

DO dump beer
A beer festival is a marathon, not a sprint. There’s no way you can safely sample everything. Don’t be afraid to dump a beer you don’t like — or simply had enough of to quell your curiosity. Nobody’s going to take offense. If you’re unsure whether something is likely to tickle your fancy, ask for half a glass instead of a full pour.

DO show up early — or, at least, on time
Arrive early to beat the crowds. That way you’ll have more opportunity to chat up the brewers and sample their creations to your heart’s content. Not only will you get the lay of the land early — we’re talking snacks and shady spots — you’ll get a jump on popular styles that may be scarce later in the day.

DO leave the driving to someone else
Plan ahead and select a designated driver for the day. Or just skip driving altogether and split a rideshare with friends. As extra enticement to bring along someone who can remain sober behind the wheel, the event even offers $20 designated driver tickets for purchase at the door. Plus, there will be a variety of non-alcoholic beers and other beverages available from participating brewers.

DON’T skip the hydration stations
Take a moment to think back on the hard-partying days of your youth. Or to last weekend, if those days aren’t fully behind you. Staying hydrated is key when planning an entire afternoon of imbibing. Try to drink a glass of water for every beer you sample, or at least stop by the water stations every couple of beers. It’s also a great way to wash out your cup between beers, keeping your palate ready for your next sample.

DON’T pre-game
Look, we know the San Antonio Beer Festival is one giant excuse to party, but it’s best to save the partying for the event itself. You and your friends will be awash in drinking options once you get there, so play it smart and don’t spend time or money getting tipsy beforehand.

DON’T forget to eat
Eat before you arrive at the event or make time to nosh while you’re there. The San Antonio Beer Festival isn’t all about the beer, after all. With all the food trucks and great snacks around, there’s no excuse for running around on an empty tank. You’ll thank yourself later.