Protesters at Trump's SA Fundraiser Were Passionate and Peaceful 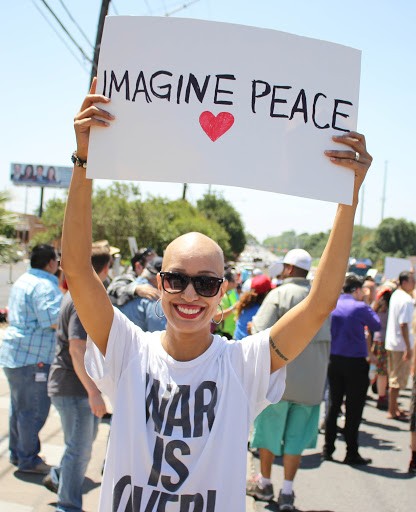 Hundreds of San Antonians lined Fredericksburg Road today to either support or protest against Donald Trump, the Republican presidential wannabe who was in town for a fundraiser on Friday. But they did so peacefully, without the violence that’s marred other Trump events around the country.

The private fundraiser took place over lunch at Oak Hills Country Club (5403 Fredericksburg Road) near the Medical Center. Trump, the presumptive Republican nominee, was only in San Antonio for a few hours, flying in from Dallas this morning and then moving on to Houston for another fundraiser and a rally.

The two groups lobbed chants and screamed slogans at each other, but scarcely had any other interaction aside from a few Trump supporters straying to the protester side.

But even when that happened, designated peacekeepers were quick to alert police and escort the interlopers away before any aggression — much less violence — erupted. Volunteer peacekeepers dressed in red milled through the crowd, keeping a finger on its pulse. Keeping the peace was the primary objective according to Belle Solloa, a volunteer peackeeper from the South Side.

“It’s easy to be angry, it’s easy to want to instigate the other side,” Solloa said. “You could bring your signs, your T-shirts, your passion … but at the end of the day you respect the boundaries. It worked as well as we wanted it to.”

Protesters held signs that read “Mr. Hate, Leave Our State,” “Dump the Demagogue” and “Orange Is The New Racism” among dozens of others. The scene was colorful and noisy, with chants, music from stereos and voices amplified by bullhorns filling the air.
A Vietnam War veteran and San Antonio native, Tony Dominguez said it’s been decades since the U.S. has seen the kind of “political uprising” that Trump inspires. Although Dominguez doesn’t think Trump will win, he’s still scared of that possibility.

“We’re trying to save our troops are still out there right now. We don’t want to endanger them more because of something Trump says,” Dominguez said.
Another protester, Kevin Bishop, held a sign that read "Donald Trump Is the Devil Incarnate." He said he thought it was important to match the businessman's incendiary rhetoric with his own.

"[If Trump is elected] our country will self-destruct internally because of the racial bigotry ... he advocates," Bishop said. "Leadership is supposed to bring people together, not be divisive and destroy from within.

On the other side of the the street, Gilbert Romo wore an NRA ballcap and a cardboard sign across his neck that said “Trump 2016: Build the Wall.” For him, building a wall across the southern border is a critical piece of his support for Trump:
Anne Chick, a 70-year-old San Antonio resident, said she hadn’t voted in an election since she was 21 (and couldn’t remember who she voted for then), but Trump had inspired her to become politically active. She wore a red “Make America Great Again” hat, and carried a yellow rose she hoped to give to Trump.

When Chick realized she wouldn’t be able to get close enough to Trump to give him the rose, she asked a reporter if he would do it for her. When she was told that media members weren’t allowed in the club either, she turned to Police Chief William McManus. He said he wouldn’t see Trump either.
“He just touched my heart,” Chick said of Trump. “He has no reason to run for president. He's got money, he's got a beautiful family, and I believe he loves our country.”